THE DARK KNIGHT RISES: Spoiler Pictures of the Tumbler

SuperHeroHype has posted a few new photos of the Tumbler on the set of THE DARK KNIGHT RISES in Pittsburgh.  As you’ve noticed in many set photos, there are a few Tumblers driving around with the original look from BATMAN BEGINS (i.e. the camouflage look).  The one below seems to have dug a hole (or fallen into one). 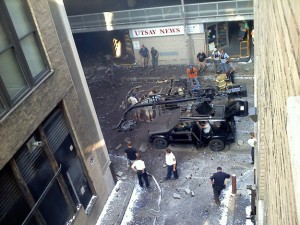 Tumbler on the set of THE DARK KNIGHT RISES

Tumbler in the ground

My theory is that Bane figures out Batman’s true identity, and then with the help of Talia Al Ghul (aka Miranda Tate of Wayne Enterprises, played by Academy-Award winner Marion Cotillard) he and his henchmen break into Wayne Enterprises and confiscate a lot of Batman’s weaponry, including the Tumblers.  Recent set photos showing Marion’s character climbing into a Tumbler with henchmen bodyguards seems to support that theory.