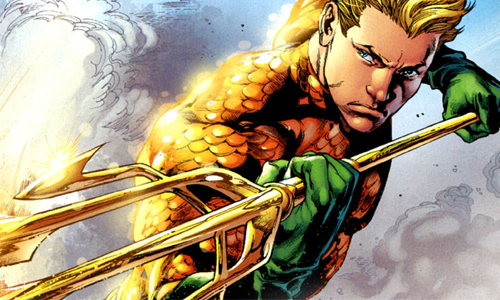 He’s the redheaded stepchild of the Justice League squad. If a girl set him up on a blind date with a friend and was asked if he were cool, she would reply, “He’s got a great personality!”

When the show Entourage decided to pick a superhero for Vinny Chase to play in a movie, they picked the one hero so corny that the idea of a blockbuster film about him was something so laughable you could only dream it up for TV. Did we mention James Cameron was the director?

But things have changed in Hollywood ever since Marvel assembled their superhero universe, which featured their own cast of seemingly laughable characters in Captain America and Thor. Yet Marvel made it work, proving that with a strong cast and script, you can make a compelling film for just about any hero.

So with the news that a Justice League film will follow the Man of Steel sequel, it’s becoming more and more likely the that comic book character that has seemingly been a fish out of water his entire existence (pun intended), will finally get his day on the big screen.

The only question is: how do you do it?

Aquaman’s origin story has changed a number of times over the years. One has him growing up in Amnesty Bay, ME, as the son of a lighthouse keeper. Another has him born in Atlantis and then raised by Dolphins. We don’t know which version Warner Bros. is going to go with, but if you ask me, I say we just tell people the Tom Hanks movie Splash is an Aquaman movie and move on.

But his introduction and development in Justice League has many fans concerned, and rightfully so given that Warner Bros. shit the bed with Green Lantern, a character who, despite not being the most mainstream hero, had a rich history of source material to pull from.

So how do you introduce Aquaman and make an Aquaman movie without it feeling like an SNL skit? Here are a few ways…

BADASS FROM BELOW: AQUAMAN’S POWERS AREN’T CONFINED TO THE OCEAN

There are rumors floating around that Game of Thrones star Jason Momoa is in the running for Aquaman. I think he’s a perfect choice. Why? Because he’s a badass, something you don’t ever think about when you hear Aquaman’s name.

First of all, Aquaman’s powers aren’t strictly confined to the ocean. In fact, he possesses superhuman strength and has telepathic powers that allow him to communicate mind to mind and speak any language on Earth. And let’s not forget that he can swim at over 100 mph and communicate with animals, too. All in all, he sounds like a pretty cool superhero. But how do you bring him on land?

Well, as we saw in Man of Steel Metropolis is right on the water, and if Snyder and his team really want to include Aquaman they’ll make sure Gotham sits near the ocean, too. I don’t think we need a great deal of background into Aquaman’s life, though, at least not right away. I also think he should be the loose cannon of the Justice League team, having had little interaction with humans up to this point. Plus, since Aquaman is telepathic, he doesn’t really need to speak much. His look and body language should say it all, which is why I think Momoa would be perfect for this role. As we saw in Game of Thrones, Khal Drogo’s look could make men piss their pants. Aquaman should be able to do the same. He should initially view humans as inferior to Atlanteans, and pity them for how selfishly they live their lives. This would also make for the beginnings of a good character arc for him.

If you make Aquaman a mystery, too, fans will want to know more about him and where he comes from. It’d be great to see a scene at LexCorp where Aquaman, dressed almost like a homeless person, is staring at a massive aquarium along the wall of the lobby and gets berated by a LexCorp employee for trespassing and told to leave. Aquaman gives a smirk and walks away. After the employee watches him leave he turns back to the tank and notices one of the aquarium’s massive sharks pressed up against the glass, baring his teeth at him.

Justice League should give us just a tease of Aquaman’s aquatic abilities, and excite us enough that we want to see him in his own solo movie. Build a compelling character first, and then revisit his origin story later on.

There is also the issue of Aquaman’s suit, which is to DC comics what Captain America’s suit is to Marvel comics. It’s old-fashioned and in desperate need of an upgrade. Throw out the whole scaly-orange-green-suit. It doesn’t matter if you are tough as nails and can swim 36,000 feet below the ocean; nobody is going to take you seriously in a suit like that. 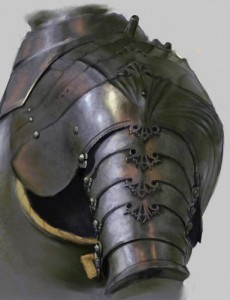 A pauldron would make for a great uniform piece.

Since Aquaman comes from a long line of Atlanteans, their army (or should I say navy?) probably has a wide range of armor pieces. He can keep the scaly pants, but make them sleek and dark. As for a shirt, I honestly don’t think it’s necessary. Give him an armored chest plate, or maybe just a cool pauldron to cover his shoulders. Aquaman is strong and powerful, so make him look the part. Plus, as ZZ Top said, “Every girl crazy ‘bout a sharp dressed man.”

WHAT’S IN A NAME?

They say we should never judge a book by its cover, but let’s face it, we all do. The same goes for how we view superheroes. Batman, Spider-Man, Hulk and Iron Man all have cool names, so it’s natural for kids to initially gravitate towards those heroes. A name like ‘Aquaman’ doesn’t scream hero, it screams ‘Marco Polo Champion’.

In Justice League, you can have someone refer to him as Aquaman as a joke, but that should not be his name in the film or spinoffs going forward, at least not explicitly. You can refer to him as Orin of Atlantis, or simply the Atlantean. Both sound like better options than Aquaman.

It’ll be interesting to see how the studio approaches the Aquaman character when Justice League rolls around. While the character is far from popular there is a lot to like about him, and I feel he’ll translate well on the big screen. Sure, he’s the butt of jokes more often than not, but he’s a founding member of the Justice League so will likely play an important role in the film. All we can hope for is that his first introduction to us will be a heroic one.