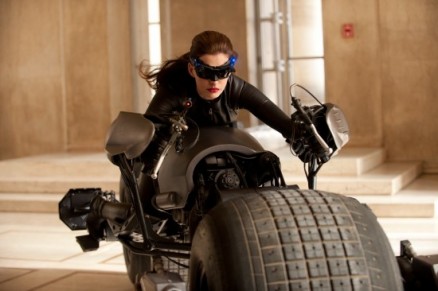 A new article from the Los Angeles Times written from the set of THE DARK KNIGHT RISES reveals some interesting new details about a scene involving Catwoman, Bane, and Bruce Wayne.  It also provides a little more insight into Catwoman’s costume, which was met with much criticism when the first official photo was released the other month.

Check out the blurb below from the Times article and also head over to my feature BREAKING DOWN THE FILM where we dissect THE DARK KNIGHT RISES trailer frame by frame.

Gotham City is a war zone. A ruthless madman named Bane has ripped away any sense of security and the citizens, haggard and clutching suitcases with refugee anxiety, sit behind barbed wire waiting to see what will blow up next. A hooded prisoner is dragged in – it’s Bruce Wayne, one of Gotham’s most famous faces – but the eyes of the crowd go instead to the woman in black standing at the top of the staircase.

“Sorry to spoil things, boys, but Bane needs these guys himself,” says sultry Selina Kyle, played here by actress Anne Hathaway, navigating the steps with stiletto heels that, on closer inspection, turn out to have serrated edges capable of leaving nasty claw marks in a fight. She also wears high-tech goggles that, when not in use, flip up and resemble feline ears.

Sounds like an interesting scene.  Is Catwoman playing both sides, working with Bane and Batman?  All I’m sure of is that wherever the Joker is when THE DARK KNIGHT RISES takes place, he’s got a smile on his face seeing how much destruction Bane is unleashing on Gotham.