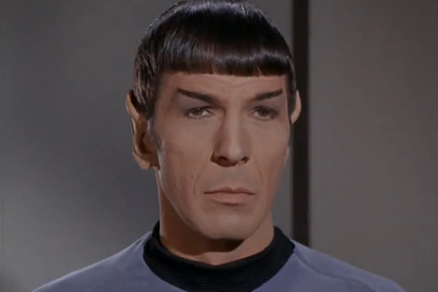 I hope all you readers had a pleasant Thanksgiving holiday.  As a Vulcan, I take logical pleasure in observing the behavior of humans on this holiday.  Consuming food to the point of unconsciousness is something I have never fully understood but have come to appreciate over the years.  And, Thursday gave us some great games to feast on as well.  We saw the Lions’ Thanksgiving Day woes continue, thanks in large part to a ridiculous rule regarding coach’s challenges.  We saw RGIII get his first win in Dallas in convincing fashion.  And, we saw Tom Brady and the Patriots put the nail in the coffin on the Jets’ season.

So what does this weekend have in store?  Here are my week 12 picks.

As a science officer, I’ve come to expect the unexpected when studying the nature of species on different planets, and I’ve come to apply the same logic to betting…until now.  After betting on double digit favorites at various points this season, I finally concluded that when it comes to double digit spreads, always pick the underdog.  The payoff is bigger and beating a team by double digits, even a bad one, is no easy task in today’s NFL game.  However, my Vulcan logic is telling me to bet on the Broncos tomorrow to cover, and since they are playing the lowly Kansas City Chiefs, I am inclined to listen.  As likely as it is for an underdog to cover a double digit spread, I can’t bring myself to favor the Chiefs in this game.  They have been the definition of embarrassment this season, not only to themselves but to their fan base.  I have visited Kansas City on a special assignment once for the Enterprise, and I can assure you readers it is one of the best football cities in this country, and the people and barbecue there make you feel right at home.  I certainly hope things turn around soon for that city and franchise, but come tomorrow, I expect another tough home loss for the Chiefs, who have yet to win at Arrowhead this season.  Expect Peyton Manning and his core of young receivers to put up big numbers in the air, and look for linebacker Von Miller to add to his sack total.  BRONCOS

The proverbial quarterback carousel seems to be in full swing in the Bay Area.  After a breakout performance last Monday Night by 49ers quarterback Colin Kaepernick, head coach Jim Harbaugh is keeping mum on who he will start in New Orleans if and when Alex Smith is medically cleared to play.  The 49ers have become somewhat of an enigma for me the last few weeks.  After ending in a tie at home against the Rams, the Niners came out last week and embarrassed the Chicago Bears.  Now, traveling cross country to face the red hot New Orleans Saints will prove to be the true barometer of success for this team going forward.  On the other side of the ball, the Saints look like the Saints of yesteryear, compiling big numbers and finding ways to win with their high powered offense.  I expect the Saints to come out firing and their crowd ready to cheer them on to victory.  It doesn’t matter who Harbaugh starts at quarterback because Drew Brees will outplay them both.  SAINTS