After a one month hiatus, I am back and ready to get blogging again.

There’s been a ton of great news of late, especially on the Batman vs. Superman front.  While I have plenty to say on the matter, much of which you will see in the coming weeks, I want to start things off by showing this great video that surfaced online of Christian Bale auditioning for Batman Begins while wearing Val Kilmer’s suit from Batman Forever.

The ironic thing about this video is that Bale is screen testing opposite Amy Adams, who was in contention for the role of Rachel Dawes (a role that ultimately went to Katie Holmes).  Adams, as you know, played Lois Lane in Man of Steel and will be reprising her role again in Batman vs. Superman, so she did land a role opposite Batman (kinda).  It’s funny seeing Bale in Kilmer’s suit because a.) the suit itself is hysterical despite the fact that we don’t get to see Bale donning the infamous Schumacher bat nipples and b.) because Bale almost landed the role of Robin in Batman Forever, so would’ve been acting opposite Val Kilmer.

Take a look at the video below followed by a nice image of Val Kilmer today.  Enjoy…

Christian Bale auditions for Batman Begins in… by BatmanNewsCom 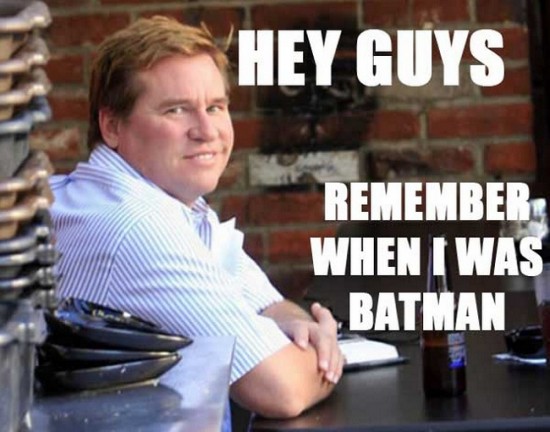