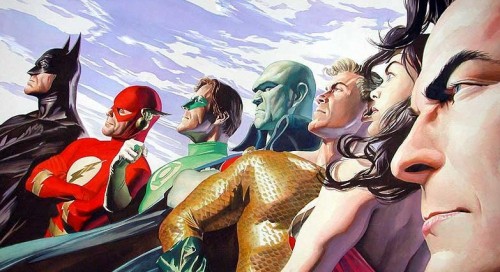 Anyone who knows me knows that I have been adamant that a Justice League movie is a terrible idea.  Several people I spoke with close to the studio said that the decision to make this film was one made primarily out of fear. After the massive success of Marvel’s The Avengers, along with the box office success enjoyed by their individual films, people at Warner Bros. were worried that their DC properties would be left by the wayside.

We’ve known for some time now that Warner Bros. was targeting a release date of 2015, which ironically happens to be the same year that The Avengers 2 is scheduled to hit the big screen.  But now, it seems that that date could be in jeopardy, along with the entire Justice League project.  Badass Digest is reporting that the studio could be looking for a new writer to replace Will Beall, who had been hired to write the script.  Reports are that execs have soured on Beall’s take and are now considering scrapping the whole script altogether and bringing on a new writer.

While few details on the script have emerged, we do know who the core members would be and that the main antagonist would be Darkseid, the biggest badass in the DC Universe.  We don’t know where the ultimate problems lie in Beall’s script, but I for one am not surprised by this news.  Marvel did the right thing by creating individual films for their characters prior to The Avengers.  They laid the foundation for their characters, so when we saw them together in The Avengers we were already familiar with their personalities and backstory.  Creating a superhero film with such big egos without laying the groundwork first is a recipe for disaster.

It appears now that the studio will wait and see what happens with Man of Steel before proceeding with plans for a Justice League movie, which has seemed like the obvious move from the get-go, but again, we’re dealing primarily with business minded studio execs and not comic book fans.  Hopefully, having time to think things over will make Warner Bros. realize just how bad a Justice League movie is at this point.  I’d still love to see this movie get made one day, but establish each character first; follow Marvel’s blueprint.  Imitation is the sincerest form of flattery, especially when money is involved.