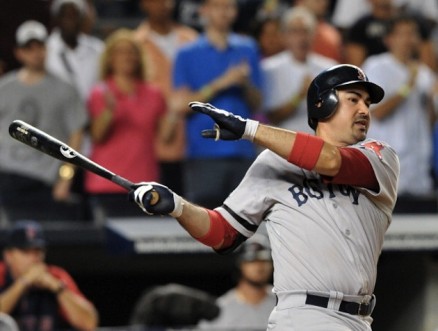 The trade, which adds about a quarter of a billion dollars to the Dodgers’ payroll, sends James Loney and minor leaguers Allen Webster, Ivan De Jesus, Rubby De La Rosa and Jerry Sands to Boston.  While Crawford underwent Tommy John surgery last week which will sideline him for at least the next year, Beckett and Gonzalez are expected to contribute right away as the Dodgers chase the San Francisco Giants for the NL West title.

Gonzalez, who hit .300 with 15 home runs and 86 RBIs with the Red Sox this season, is in the Dodgers’ lineup for Saturday night’s game against the Miami Marlins.

For the Red Sox, the trade is a result of a disappointing season and off the field drama surrounding much maligned manager, Bobby Valentine.  Whether this fire sale of players pays off remains to be seen, but it will be interesting to see what other changes Red Sox management has in store during the offseason.