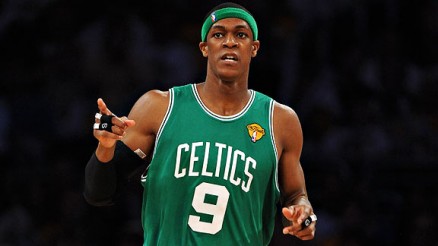 Boston Celtics guard Rajon Rondo has been suspended for Tuesday’s Game 2 playoff game against the Atlanta Hawks for making contact with a game official during Sunday’s loss, the NBA announced on Monday.

Rondo chest-bumped referee Marc Davis with just 41 seconds remaining in Sunday’s 83-74 Game 1 loss to the Hawks in Atlanta.  Rondo earned a technical for arguing a foul called against teammate Brandon Bass, and was assessed the second one moments later when he bumped Davis.  While Rondo insisted after the game that the bump was unintentional, the NBA disagreed, and now the Celtics will be without their starting point guard heading into Tuesday night’s Game 2.

Rondo is the only player on the Celtics roster who averaged a double-double during the regular season, averaging 11.9 PPG and 11.7 APG.