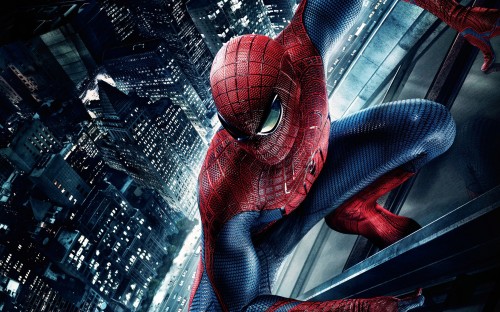 Last week, we got some exciting casting news regarding Marc Webb’s The Amazing Spider-Man 2, the followup to last summer’s blockbuster.  We learned that Paul Giamatti was in talks to play the Rhino and that Felicity Jones would be joining the cast in a yet unspecified role.  Today, the studio released the official plot synopsis for the film:

Columbia Pictures announced today that filming has begun on The Amazing Spider-Man 2 in New York. The film is the first in the history of the franchise that will be filmed entirely in New York City and New York State.

In The Amazing Spider-Man 2, for Peter Parker (Andrew Garfield), life is busy – between taking out the bad guys as Spider-Man and spending time with the person he loves, Gwen (Emma Stone), high school graduation can’t come quickly enough. Peter hasn’t forgotten about the promise he made to Gwen’s father to protect her by staying away – but that’s a promise he just can’t keep. Things will change for Peter when a new villain, Electro (Jamie Foxx), emerges, an old friend, Harry Osborn (Dane DeHaan), returns, and Peter uncovers new clues about his past.

The film is directed by Marc Webb from a screenplay by Alex Kurtzman & Roberto Orci & Jeff Pinkner, with a previous draft by James Vanderbilt, and based on the Marvel Comic Book by Stan Lee and Steve Ditko. Avi Arad and Matt Tolmach are the producers.

While I’ll be the first to admit that I didn’t care for The Amazing Spider-Man, I’m actually pretty excited with the direction the sequel is headed in.  My one issue is, why can’t we get a legitimate film featuring Venom?  A Spider-Man film series without Venom is like a Batman trilogy without the Joker.  Hopefully, he’ll make an appearance in the third film, but until then I guess we’ll have to settle for Electro, Rhino, and the Green Goblin (again).