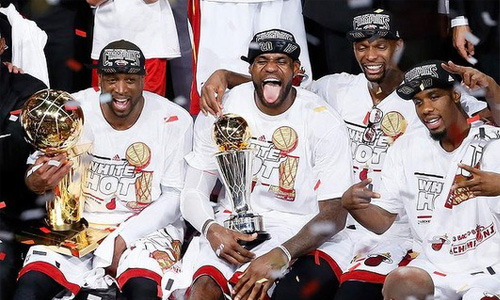 The Miami Heat are NBA Champions once again.

After escaping elimination in Game 6 on Tuesday, the Heat beat the San Antonio Spurs 95-88 last night in Game 7 to win their second straight title.  LeBron James finished with 37 points and 12 rebounds, going 5-10 from 3-point range and hitting a clutch jump shot in the final minute to give the Heat a four point lead.  Spurs forward Tim Duncan finished with 24 points and 12 rebounds but missed a shot and follow up attempt with 50 seconds left in the game with the Spurs trailing by two.

For his monstrous performance and clutch play, James was named the Finals MVP for a second straight year and now joins Michael Jordan as one of only two players in NBA history to win back-to-back regular season MVPs and NBA Finals MVPs.

The Heat have now won three championships in franchise history, and two in the three years since the “Big Three” of James, Dwayne Wade, and Chris Bosh came together in Miami via free agency in the summer of 2010.