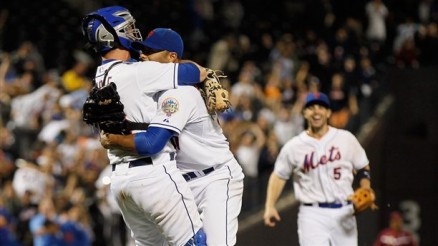 Santana, who missed all of last season after having shoulder surgery, was helped out by a blown call in the top of the sixth inning when Carlos Beltran of the Cardinals hit a line drive over third base that hit the foul chalk line and should have been called fair.  Instead, third base umpire Adrian Johnson ruled it foul, keeping the no-hitter intact, despite replays showing the ball clearly landed on the chalk line.

Despite the blown call, Santana dominated the Cardinals all night, striking out eight and throwing a career-high 134 pitches.  It was the second straight shutout for Santana.