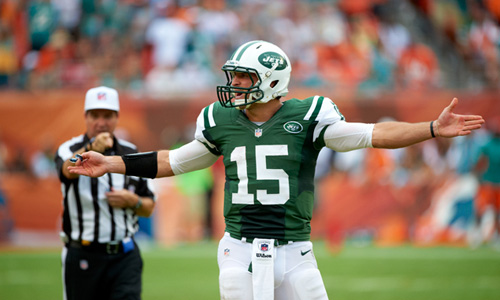 Tebow, the former Heisman Trophy winner out of Florida, came to the Jets last year in a trade with Denver, and from the get go his tenure with the Jets was nothing short of a circus.  Questions surrounded Tebow the moment he arrived, mainly whether or not he would replace Mark Sanchez as the Jets starting quarterback.  Head coach Rex Ryan said that Tebow would be a part of some Wildcat packages, but stuck by Sanchez and declared him his starting quarterback.

Tebow appeared in only 12 games for the Jets and completed just 6 passes on 8 attempts for a total of 39 yards with zero touchdowns and interceptions.  He ran the ball 32 times for 102 yards and zero touchdowns.

Tebow came to the Jets after two seasons with the Broncos, one of which included an overtime playoff win against the Pittsburgh Steelers in an AFC Wild Card game.  Tebow was a former first round selection by the Broncos.