FIRST LOOK: Russell Crowe as Jor-El in ‘MAN OF STEEL’

Here it is.  The first look at Russell Crowe as Jor-El (a.k.a. Superman’s Kryptonian father) in MAN OF STEEL.

I have to admit, I initially felt the costume looked a bit too much like something out of LORD OF THE RINGS, but the more I looked it at, the more excited I got.  You can clearly see the infamous Superman ‘S’ emblem, but what got my attention was the blue material on his arms and the dark red cape.  It looks almost identical to what Henry Cavill’s Superman costume looks like, which gives me hope that there will actually be an explanation (reason) to how and why Superman’s costume looks the way it does.

Check out the two photos of Crowe followed by a side-by-side of his costume and Cavill’s.  MAN OF STEEL opens June 14th, 2013.

Russell Crowe as Jor-El in MAN OF STEEL 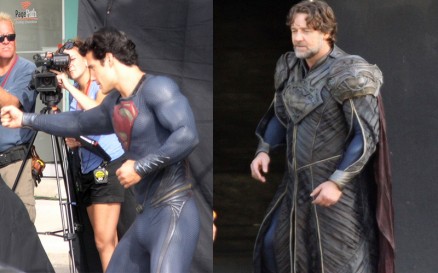