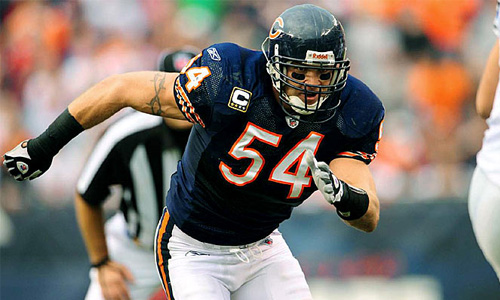 Brian Urlacher has announced his retirement from the NFL after 13 seasons, all with the Chicago Bears.

Urlacher made the announcement on his official Twitter feed:

“After spending a lot of time this spring thinking about my NFL future, I have made a decision to retire.  Although I could continue playing, I’m not sure I would bring a level of performance or passion that’s up to my standards. When considering this along with the fact I could retire after a 13-year career wearing only one jersey for such a storied franchise, my decision became pretty clear.”

Urlacher has been without a team this offseason after he and the Bears failed to agree on a new contract.  Urlacher retires with a Hall of Fame worth resume, being one of only four linebackers in NFL history to have over 40 sacks and 20 interceptions in their career.  Urlacher finishes with 41.5 sacks and 22 interceptions.