BREAKING NEWS: Derrick Rose out for season with torn ACL 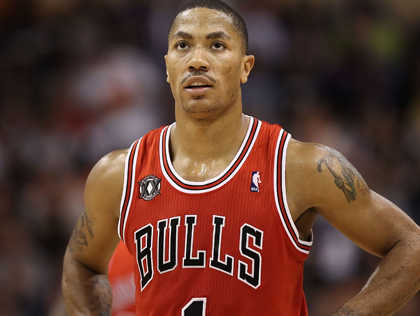 Chicago Bulls guard Derrick Rose suffered a torn ACL in his left knee in Saturday’s playoff game against the Philadelphia 76ers and will miss the rest of the season, the team announced.

Rose’s injury came after he landed awkwardly on his left knee with just 1:22left in the game and the outcome already decided.  Rose was helped off the court before the Bulls took Game 1 with a 103-91 win. He had 23 points, nine rebounds and nine assists when he was injured.

Rose, the league’s reigning MVP, battled injury all season, but looked ready to go heading into the team’s first-round matchup against the Sixers.  With Rose now out, the Bulls need players like Carlos Boozer and Luol Deng to step up because the path to the NBA Finals in the east just opened up for the Miami Heat.

Coach Tom Thibodeau has been known for keeping his key players in for late-game situations even when the game’s outcome has already been decided.  Thibodeau has been seeking a contract extension from the Bulls, and this decision may have cost him a few bucks…