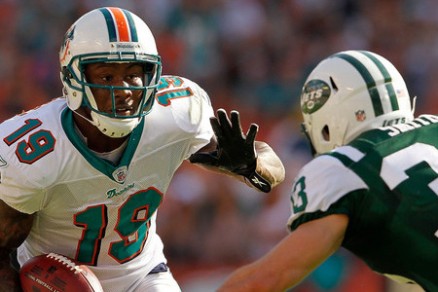 On Tuesday, the Miami Dolphins traded wide receiver Brandon Marshall to the Chicago Bears in exchange for the Bears’ third-round picks in 2012 and 2013.

In his two years with the Dolphins, Marshall caught 167 passes totaling 2,228 yards, but only nine of those catches were touchdowns.  In Chicago, he’ll be reunited with his former Broncos teammate, Jay Cutler.  In his three years playing with Cutler in Denver, Marshall enjoyed two seasons of 100+ receptions.  In Chicago, the two will look to pick up right where they left off before Cutler was traded to the Bears prior to the 2009 season (thank you, Josh McDaniels!).  It’s a great deal for the Bears, who have been struggling to solidify their number one receiver position for years.

For Miami, it’s a definite sign that Joe Philbin and the Dolphins are making a strong push for Peyton Manning. Manning met with Philbin and members of the Dolphins’ staff on Monday, and Tuesday’s trade has fueled speculation that the Dolphins are clearing cap space to sign Manning and his favorite receiver, former Colt, Reggie Wayne.

Whether or not Manning signs with the Dolphins remains to be seen, but all this talk and speculation has made one thing clear: there is no offseason in the NFL…and why would you want one?