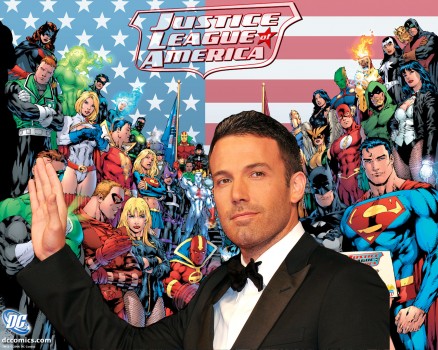 In what seems like a surprising move, Variety is reporting that Warner Bors. has approached Ben Affleck about possibly taking the director’s chair to helmd the DC Comics superhero film adaptation of Justice League.  Affleck, who played Matt Murdock/Daredevil back in 2003’s Daredevil was rumored to be a candidate to direct Man of Steel before Zack Snyder got the job.  Affleck stated that one of the reasons he was tentative about taking that job was that he had little experience in directing movies that required so much FX.  Why then would Warner Bros. go to him again with a movie that would seem even more FX laden than Man of Steel?

I think Affleck is a talented director and decent actor, but I’m not sure he is the right fit for this type of movie.  Is Warner Bros. just looking for a big name to attach to this project now that Christopher Nolan has taken his name out of directing contention, or do they legitimately feel Affleck is the right guy for the job.  This is a very delicate project for the studio because there is so much relying on it.  There’s no doubt that the studio is hoping this movie will help propel other DC superheroes into the mainstream and allow them to create spinoff films for Wonder Woman, The Flash, Martian Manhunter, and even Green Lantern–either through a reboot or sequel.  Giving the reigns of this film to a director who isn’t comfortable with FX seems like a risky and unnecessary gamble, in my opinion.

It’ll be interesting to see how things unfold going forward, but it’s safe to say that Warner Bros. is going full speed ahead with this project.  Whether that’s a good thing or not remains to be seen.

Head over to /Film to read more on this developing story from Germain Lussier.