BACK IN BLACK: Why The New Batman Reboot Is A Good Idea 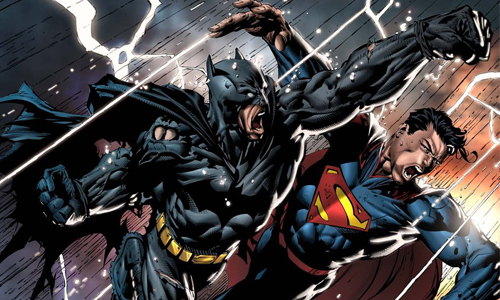 Let that sink in folks, it’s real.  After decades of starring in their own solo films, the Man of Steel and Caped Crusader are finally going to team up in a live-action film together.  The announcement, which came at Comic-Con 2013 in San Diego, surprised many since most fans thought we wouldn’t see Batman and Superman together until a Justice League movie.  But it’s clear that this film will act as a precursor to Justice League, setting the stage for the epic superhero team film that Warner Bros. and DC hope will rival Marvel’s The Avengers.

While part of me feels a little bad for Henry Cavill—since he finally got his own franchise only to now have to share the screen with the Dark Knight in his sequel—I feel this reboot idea by Warner Bros. is the right move on a number of fronts.

Here are my three reasons why…

NEW APPROACH TO AN OLD IDEA

Zack Snyder revealed that the story for the Superman/Batman movie won’t be an adaptation of Frank Miller’s graphic novel The Dark Knight Returns, but said, “it is the thing that will help us tell that story.”  In a nutshell, it tells the story of a 55-year-old Bruce Wayne who comes out of retirement to become Batman again when he sees the level of crime rising in the city and goes up against a gang that calls themselves the Mutants.  After defeating the leader, the remaining gang members eventually come to idolize Batman and start patrolling the streets as a non-lethal fighting force known as the Sons of Batman.

Later on, after Superman diverts a Russian nuclear warhead, an electromagnetic pulse sends Gotham into a complete blackout, but thanks to Batman and his loyal gang, the city becomes the safest one in America.  Embarrassed by this, the government sends Superman to Gotham to take Batman out.

While it’s safe to say we won’t see a 55-year-old cast in the part—because Warner Bros. will likely want this new Batman actor to appear in his own solo franchise as well as Justice League movies—I think it’s a safe bet that at the beginning of the film we will see a Bruce Wayne who has already hung up the cape and cowl, maybe at a young age like 35.  It would make sense, too.

Since this new Batman will live in a world where Superman exists, we may be led to believe that the events of Man of Steel happened post-Batman in Gotham.  We don’t need another Batman origin story.  Let’s face it, nothing is going to top the one in Batman Begins.  But by bringing Batman out of retirement, should that be the route Warner Bros. takes, we would get a completely new approach to a Batman origin story, i.e. rebooting him after he’s already existed (make sense?).  When we see this new Batman on screen, we’ll know he already has a suit, cave, cool car, and the Bruce Wayne playboy persona down pat.  We can just jump right into the action and not worry about all the exposition that normally accompanies origin stories.  We know who Batman is, where he came from, and why he dons the cape and cowl.  Let’s just see him in action.

SO YOU’RE A TOUGH GUY, HUH?

How does that old saying go?  If you’re the new kid in school find the biggest, toughest guy on your first day and beat the crap out him so everyone knows not to mess with you (or is that if you’re the new guy in prison?).  Regardless, that seems to be the approach Warner Bros. is taking with this new Batman.

Let’s face it: as great as Batman is, when you compare him to the other members of the Justice League he comes up short in terms of superpowers.  He has none, so on the surface it seems like he would be the weakest link.  It’d be like taking Tom Brady, arguably the best quarterback in the NFL, and putting him on a basketball team with the likes of LeBron James, Kevin Durant, and Kyrie Irving.  As great as Brady is on his own, when you compare his abilities to those other guys he seems completely out of place.

Warner Bros. seems to realize this, which is why they’re opting to have Batman faceoff against the biggest and strongest member of the Justice League first.  We’ll be able to see how fearless and clever Batman is when he fights Superman, so when we see him in a Justice League film squaring off against the likes of other powerful villains like Darkseid, we’ll know he can stand his own against the best of them.  By then, Batman will be the ultimate badass in our eyes.

THIS AIN’T YOUR NOLAN BATMAN

One of the biggest questions surrounding a new Batman film has been, “how will it compare to Christopher Nolan’s Batman?”  While it may seem like an unfair question, it’s completely valid.  Nolan reimagined the Dark Knight in a way few thought could ever be done.  He grounded his characters in reality, made Gotham feel like it could be any city in America, and breathed new life into a character that had been beaten into submission by Joel Schumacher and his now infamous bat nipples.

So it’s understandable why fans are a little concerned to see a new Batman on screen without Nolan and Bale.  But by rebooting Batman in a film with Superman, we know right away that this new Batman is on the complete opposite end of the Batman Spectrum when compared to Nolan’s.  In fact, there is no comparison.

This new Batman will exist in a world where men in tights can fly, wear magical green power rings, and run faster than a paparazzo from Kanye West.  Not only does this open up the possibilities for incorporating more characters into Justice League films, but it also offers the foundation for a whole new Gotham City.  The idea of characters like Mr. Freeze or Poison Ivy existing in Nolan’s Gotham is laughable, but with this new Batman, anything is possible.

So whether or not you are excited for this new Batman movie one thing is certain: the Dark Knight will soon be back in black, and we’ll all be lining up to see him.

Download the script for the abandoned ‘Batman vs. Superman’ movie