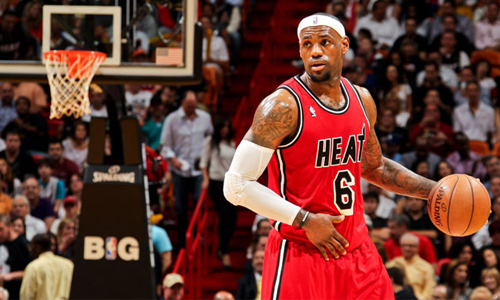 As of right now, the Miami Heat have won 24 straight games, haven’t lost since February 1st, and in the last two games have overcome deficits of 17 and 27, respectively.  They’ve not only established themselves as the team to beat in the NBA heading into the playoffs, but they’ve managed to enter the conversation as one of the greatest teams of all time.  And, they deserve to be in that conversation.  They are that good; I mean, 1971-72 Los Angeles Lakers and 1995-96 Chicago Bulls good.  Those Lakers won 33-straight games and now have the Heat in their rearview mirror.  The Bulls, while they didn’t have a winning streak greater than 18 games during the 1995-96 season, did manage to win an NBA record 72 games.  Those two teams are atop the pedestal of NBA greatness, but now, they need to make room for another member.

But despite the Heat’s recent surge of dominance, a lot of people are still apprehensive about putting them in the same discussion as those great teams.  Is it because our sense of nostalgia overpowers our common rationale when viewing today’s game?  There seems to be this sense that because a team accomplished a certain feat decades ago, it’s a bigger accomplishment.  But perhaps the primary reason some people still aren’t giving the Heat the respect they deserve is because they’re (still) bitter.

When LeBron made his decision to join forces with Dwayne Wade and Chris Bosh in Miami back in 2010, it shifted the landscape of the NBA and free agency forever.  Gone were the days when bitter division rivals like Jordan’s Bulls and Thomas’ Pistons fought tooth and nail for NBA supremacy, and instead we were introduced to a new day and age where the slogan, “If you can’t beat ‘em, join ‘em” seemed to be the new fad.  But the Heat weren’t the first team to start this trend.  The 2007-08 Boston Celtics get credit for that.  After acquiring Ray Allen and Kevin Garnett via trades in the summer of 2007 to pair alongside Paul Pierce, the Celtics showed the league what can happen when three superstars put aside their egos for the greater good.  Their run to the championship in 2008 and Finals appearance in 2010 proved that superstars could play together and do so successfully.

So why did the Heat get some much, well heat, when they brought together their Big Three?  Besides the fact that LeBron’s decision was a televised event that essentially emasculated and embarrassed the city of Cleveland and its fans, the primary reason is likely due to age.

When Pierce, Garnett, and Allen joined forces they were 29, 31, and 32, respectively.  All had reached their prime and were seemingly on the other side of the hill career wise.  When the Heat’s Big Three of James, Wade, and Bosh got together, their ages were only 25, 28, and 26.  All three were in the prime of their careers and instead of trying to win a championship on their own they decided that having superstar teammates in their prime was a far better option than flying solo.  Many people saw their decision as a copout and an easy way to win a championship, but when a player’s career ends their greatness is measured in only one thing: rings.  So by coming together to fight as one, the Heat’s new Big Three had greatness on their mind.  Sure, it might take time for them to get acclimated and learn to play alongside each other, but the results would eventually come.

Unfortunately for them, our society is not one known for its patience.  With the advancements of technology and social media, information is at our fingertips in a way it’s never been before in human history.  This has been both good and bad.  On the one hand, we are able to interact with people across the world and get breaking news stories and sports scores faster than ever before.  The problem, though, is that we’ve also become increasingly impatient as a result, especially when it comes to sports.  The days of waiting for players and teams to develop their talent are over.  Either win now or find someone who can.

So when the Heat stumbled out of the gate at 9-8 to start the 2010-11 season, it’s not surprising that people were calling the Big Three experiment a failure and claiming that head coach Erik Spoelstra couldn’t coach the talent that team president Pat Riley had assembled.  And while the Heat eventually righted the ship and finished the season with a respectable 58-24 record and made it all the way to the Finals, their championship loss to the Dallas Mavericks only added fuel to the fire for critics.  LeBron was criticized for virtually disappearing in the fourth quarter of every game, and questions remained as to whether this team had what it took to win it all.

But the Heat’s failure to win a championship in year one was the catalyst that helped them capture the title the following year.  Their loss in the 2011 Finals was like that scene in The Avengers when Hawkeye and Loki’s minions attacked the Helipad and threw the entire team into chaos and disarray.  Here was a talented group of players who folded under pressure.  But like the Avengers team, the Heat came back and had the last say.  Not only did Miami capture a title last year, but they catapulted themselves to the top of the NBA hierarchy where they’ve remained ever since.

So while some critics may still have a grudge against the Heat and LeBron, the majority of us know that what we are seeing now with this winning streak is what makes the game of basketball fun to watch.  We love greatness and admire it.  We hold players like LeBron in the highest regard, and when the day comes that he finally hangs up his Nikes, we’ll be searching the world in vain for a player to fill those shoes.

Love them or hate them, what the Heat are doing now is historic, and twenty years from now we’ll remember this streak more than any “decision.”  To the critics, shut up and enjoy what you’re witnessing because the Heat are going streaking, and we’re all along for the ride.

Blake Griffin as the Hulk