UNIFORM VIOLATION: The Downside To Every Superhero Uniform 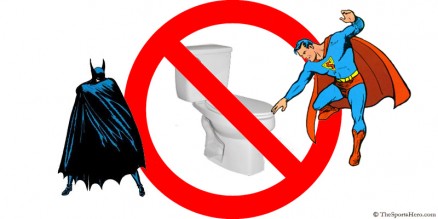 The Uniform.  For a superhero it represents who they are and what they stand for.  The development of the uniform is a process.  A hero has to figure out what works and what doesn’t and ask themselves important questions.  Can I move properly?  Do I have enough protection?  Is there room for cool gadgets?

All these factors come into play in a uniform’s design, as we’ve seen in such films as Batman Begins and Iron Man.  A superhero has to make sure they look good, too.  Nothing worse than having cool powers and wearing a suit that looks like it was pulled out of a clearance bin at Wal-Mart.

Regardless of whether a uniform is made from money, power rings, or hand, there’s one emergency that superhero uniforms, despite all their incarnations, have failed to take into account: The Bathroom Emergency.

It doesn’t take a lot to notice that most superhero uniforms are onesies (Maybe being a superhero grants you the ability to actually tolerate wearing one?).  In any case, it presents a huge problem for heroes when it comes to taking a bathroom break.

Here are three rules every superhero should abide by when designing their suit to help them battle the one true enemy known as incontinence.

When it comes to bathing suits for women, there is nothing sexier than a two-piece swimsuit.  Think about it.  You’re a teenage boy on the verge of entering manhood.  Are you going to try and swipe your dad’s Sports Illustrated Swimsuit Edition filled with models in bikinis or your mom’s Aqua Aerobics Digest showing elderly women working out in a pool?  It’s a no-brainer!

Yet for some reason, superheroes think onesies are hip, none more so than Superman it seems.  Superman has arguably been the most popular superhero since his first appearance in 1938.  His physical features have changed over time, yet his suit has pretty much remained the same.

You’ve got to wonder why a guy with all the power in the world wouldn’t opt for something a little more badass.  Superman has to balance his double life as a hero with his other one as beat reporter for the Daily Planet.  Clark Kent is supposed to be the everyman, and blend in with the crowd.  How is he supposed to do that when he has a massive cape and onesie on underneath his clothes?  What if he’s at a ballgame and accidentally consumes some rancid hot dogs that even his super digestive system can’t handle?  Imagine the guy in the stall next to you virtually stripping down naked, pulling off his onesie and massive cape (which I still don’t know how he hides underneath his clothes) before releasing a sonic BOOM in the bathroom.  Granted, strange things happen in public restrooms, but even that would be a bit much.

So, bottom line?  Split your costume into two parts: top and bottom (and ditch the cape whenever possible!).  It’s simple, convenient, and you’re always ready in case the stomach flu arises.

Sometimes, it’s not as simple as splitting your costume into two pieces.  Take Batman for instance.  His suit may be a one piece but it’s not really a onesie.  As body armor, it has more definition and protection than your average one-piece superhero suit.  There’s not much room for redesign to allow front or backdoor evacuation exits—if you catch my drift—but in theory, Batman could use a catheter inside his suit to help with bathroom emergency situation number one.

Going number two while jumping over Gotham’s rooftops may not be so simple, so Batman will have to pack his utility belt with Imodium AD or Pepto-Bismol.  A handful of Imodium will clog him up to the point of perpetual constipation.  And, if you think about, this could easily explain Batman’s dark, angry persona.  I mean, for a guy with a catheter in one end and a cement wall of Imodium AD blocking the back end, it’s understandable why he would be such an a-hole at times (no pun intended).

The utility belt is an underrated accessory for superhero suits.  Some may see it as a burden, but when duty calls, the belt will always be there to answer.

If for whatever reason going two-piece or using a utility belt fails, there is always the good ole fashioned pregame dump.  The pregame dump dates back to the days of gladiators fighting in the Roman Coliseum.  It’s a ritual that’s lasted through time and is still a custom for athletes today.

The pregame dump not only allows you to discharge the remains of the pregame meal, but it allows you a few moments of meditation in your own Fortress of Solitude, concentrating on, and visualizing, the task ahead of you.  For Spider-Man, Superman, and The Flash, a pregame dump seems like the best route to go if they’re dead set on sticking with a onesie uniform.

The draw back of this option is that a routine poop schedule is rarely a part of a superheroes life.  They have to be ready to drop everything at a moment’s notice (sans their pants) to spring into action, so taking a relaxing dump beforehand seems impossible.  The only hero it’d really work for is Batman, since he only goes out at night.  (Quick Side Note: If you were a criminal in Gotham, why not do your worst during the day?  Batman never comes out then.  So what if it’s light out.  Wouldn’t you rather deal with regular cops that you can handle rather than wait until night to deal with someone who can fly and see in the dark?  Just sayin…)

The pregame dump, while relaxing and beneficial in its own right, doesn’t allow the necessary flexibility needed for a superhero.

While uniforms are constantly changing, for better or for worse, heroes must keep in mind the basic needs of the human body.  For most heroes, they started off as normal humans who were granted a great gift or power.  Despite being able to fly, run fast, or create constructs from a green power ring, the majority of heroes at their core are still human beings.  While their suit is designed to help them when duty calls, they need to make sure their suit is just as capable of performing its task when the real duty calls.