TIMMY AND THE JETS 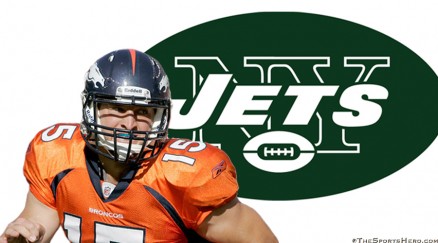 Perhaps you’ve heard the news: Tim Tebow is now a New York Jet. As a long-suffering Jets fan, I’m conflicted. I witnessed first-hand on TV the highs and lows of a Tebow-led team when the Denver Broncos unleashed a fourth quarter comeback on the Jets last season. I laughed throughout the first half as his errant throws landed yards away from his intended target, and cringed as the second half progressed and Tebow marched down the field with reckless abandon. Also, I just don’t like the guy.

Few athletes have approached the level of fawning from the media that Tim Tebow has accrued in such a short time. When players (mostly quarterbacks) do get to that level, I tend to loathe them. The last such man, one Brett Lorenzo Favre, also arrived via trade to the Jets with accompanying fanfare. Forcing myself to root for that self-involved, media-fellated diva was difficult, and by the time I got around to it, he started sucking. Favre was blatantly injured to end that season, but the thought of benching him never seemed realistic because of his stupid streak. Admittedly, his backup was Kellen Clemens, and the disastrous end to that season led to the firing of Eric Mangini and the subsequent hiring of Rex Ryan, so it wasn’t entirely bad. When Favre went on to choke in the playoffs for the Vikings and evidence came out of him texting pictures of his manhood to professional attractive person Jenn Sterger, I savored it (his public shaming, not his manhood.) Other than perhaps Roger Goodell himself, Tim Tebow is the worst possible manifestation of this false idol worship, and his arrival has me confused. I’m sure he’s an incredibly kind, generous guy, but all I can see is a smug, self-righteous douche. And yet, I must root for him.

Personality notwithstanding, there are serious questions as to just how good Tim Tebow is at football. He completed only 46.5% of his passes last season, an abysmal number. By comparison, Mark Sanchez completed a thoroughly mediocre 56.7%. Imagine how much Santonio Holmes will bitch if Tebow takes over the starting role. The departure of Brad Smith prior to last season led to a reduction in the Wildcat aspect of the Jets offense. With Tebow, the Read Option (now complete with forward pass!) will presumably return in full force. Tony Sparano replacing the sub-cromulent Brian Schottenheimer as offensive coordinator should help in that regard, as well.

Furthermore, some critics have argued that Mark Sanchez’s progression into a respectable quarterback has been so slow in part because of the lack of a legitimate backup to push him. Mark Brunell has presumably done a good job as a mentor, but in the back of his mind, Sanchez has always known there was no threat of him being unseated. Now, that threat exists, but it may be too great. Jets fans are among the guiltiest at busting out the boos early or chanting for the backup after an incomplete pass, and an iconic figure like Tebow will only bring that out more. Rex Ryan and Mike Tannenbaum seem to love Sanchez (witness the inexplicable contract extension), and that should protect his job as long as the Jets are in playoff contention. Nevertheless, the tangible, on-field benefits seem slight compared to the risks. 5-10 plays a game could provide a nice change of pace for the offense, and certainly Tebow is a better backup QB than Drew Stanton. Given the tenuous unity in the locker room, and the insanity of the fans, this could end up blowing up and costing Ryan and Tannenbaum their jobs. Or it could just kind of fizzle out and have no real impact on the season. Usually things aren’t feast or famine; a nice light meal is common, if not exciting to report. This metaphor is in no way strained.

Fortunately, the price tag was not overwhelming: a 4th and 6th rounder in exchange for Tebow and a 7th rounder. The Jets have had moderate success with their recent late-round draft choices, acquiring depth but never striking it rich with a late-round sleeper. Essentially, the Jets are giving up the chance to draft a 3rd-string RB and a shitty Guard in exchange for Tebow and a special teams player. The $2.5 million (or so) paid by NY to Denver is essentially meaningless (easy for me to say) because it has no cap ramifications. The Jets already sell out their games, and jersey sales are shared throughout the league, so from a pure business standpoint this move doesn’t matter as much as it would for, say, the Jaguars. The Jets have a somewhat pathetic need to show up on the back-page of tabloids, and in that respect this deal will be wildly successful.

There is a probably apocryphalstory about Tim Tebow during the combine. Evidently, a group of potential draftees convened in a room to take the Wonderlic or some such test. Before they started, Tebow exhorted his fellow former student-athletes to take a moment and pray, to which someone else yelled, “Shut the fuck up!” Whether it’s true or not, this story is hilarious, and speaks to the fundamental issue of leadership: to lead, people must be willing to follow. Despite some grumbling about being under-appreciated by Willis McGahee, last year’s Broncos seemed to appreciate Tebow’s “Aw, shucks” approach. I doubt they were a 53-man traveling gospel choir, but the Jets are on a whole ‘bother level. Rex Ryan’s foot fetish, Antonio Cromartie’s gaggle of children whose names he doesn’t know, Santonio Holmes’s very life essence, Mark Sanchez’s swingin’ bachelor lifestyle, Bart Scott’s big mouth (no longer backed up by his play on the field)… there’s a lot there. If Tebow starts proselytizing to these men, they will almost certainly lock him in a broom closet with a meth-addled prostitute. Still, as soon as he runs for a big first down, I’ll be among the masses chanting “Te-booow!” I may lose yet another of my last shreds of dignity, but at least I get to root for a team that will once again raise my hopes only to shatter them like so many footballs to the groin.

Oh, well. At least our coach wasn’t suspended for the whole season…