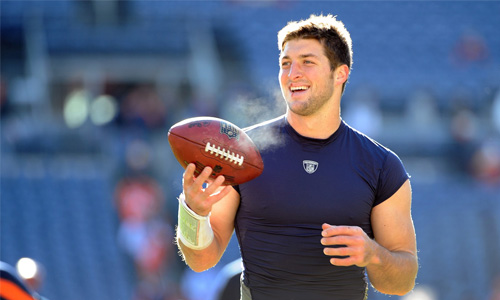 League sources have told ESPN that the former New York Jets quarterback is expected to sign with the New England Patriots and participate in the team’s mandatory minicamp this Tuesday as a quarterback.

Tebow will be reunited with Patriots offensive coordinator Josh McDaniels, who drafted Tebow in the first round of the 2010 NFL Draft while he was head coach of the Denver Broncos.  The move comes on the heels of a report last month that Patriots head coach Bill Belichick disliked Tebow and didn’t feel he’d be a good fit with the team.  Tebow has been looking for a new team since being cut back in April by the Jets shortly after the team drafted West Virginia quarterback Geno Smith in the second round.

Tebow has thrown for 2,422 yards in his three NFL seasons with 17 touchdowns and 9 interceptions.  He’s also run for 989 yards on 197 attempts with 12 touchdowns.