March Madness is finally here!  With that comes THE SPORTS HERO BRACKET CHALLENGE.  Below are our brackets and commentary.  We’ll see who comes out on top at the end (that’s what she said!).

COLIN
“It’s always a crapshoot come tourney time…fortunately, I’m an expert when it comes to crapping.” 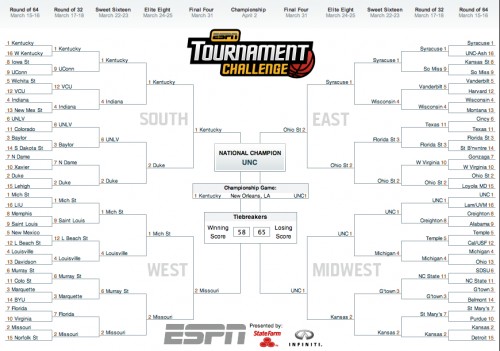 BUSHRA (co-founder)
“I made my picks according to my gut feeling…which is never wrong!” 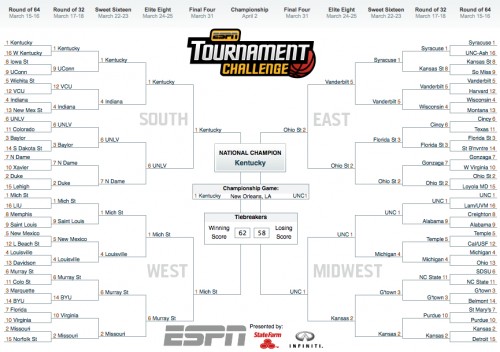 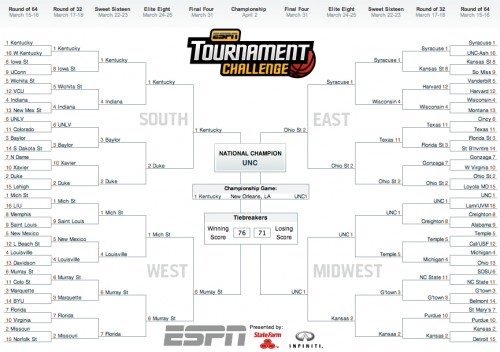 “First, my credentials: I have none. I only follow college sports insofar as they relate to professional sports. I have no real rooting interests: nobody in my family went to big-time D-I schools, nor did I. I like Michigan for their football helmets and the Fab Five; I like Miami from their The U days; I like St. John’s because they’re from NYC and produced Ron Artest and half of my NBA Jam team in Chris Mullin. I feel very strongly that the four play-in games are decidedly not the first round. I almost always pick the Ivy League team to win a game, and this year is no exception. Since Gonzaga’s first forays into bracket-busting, I’ve rooted for mid-majors. This year, I have Murray State going to the Final Four. I typically base my championship pick on who has the most NBA talent, but after years of being burned by John Calipari, I have Kentucky losing in the final. I picked UNC, but I don’t really care. That said, my bracket is the best, and all shall kneel before me and tremble when I get every pick right.” 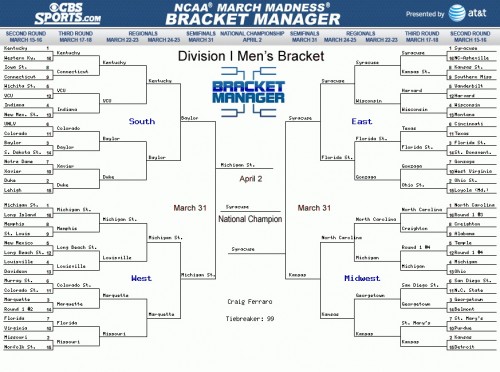 “If any of you have ever seen soccer coverage on ESPN you may have had the joy of watching Tommy Smyth.  The fiery old Irishman checks in each week to rank the top 25 teams in the world.  He is often criticized and questioned about his decision-making.  Smyth responds by saying only he knows the magic formula and it could never be described.  So while I won’t ever mention the “old onion bag” I will use a similar formula in determining my picks.  This mysterious formula is part logic, part superstition, part religion, part guesswork, and part Miss Cleo.  So take a look at my bracket and I’ll summarize each region and the Final Four below.  Read it and weep:

East Region:
I’ve got Syracuse coming out here.  The reason is simple.  Syracuse basketball is the scene of the second most talked about coach sex scandal.  Don’t you think the players are tired of being overlooked?  They’ll rectify this in a major way.  Only other picks that are unconventional are: Harvard over Vandy, Texas over Cincy, and Gonzaga over Ohio St. in the 2nd round.

Midwest Region:
Jayhawks squawk their way past UNC here.  BBall royalty on display here.  I’ve got the play-in winner over Temple as the only upset here.  Somehow this region isn’t too exciting.  I guess that’s just how it is in the Midwest.

South Region:
I’ve got Baylor winning this region. RGIII’s momentum will carry over from the gridiron to the hardwood.  Plus I think these guys can ball.  Where did this school come from all of a sudden?  Sure hope there’s no recruiting scandal brewing.  Otherwise I’ve got VCU beating Wichita St and Indiana.  I saw these boys put the beat down on my Mason Patriots recently, and visited their fair city of Richmond.  So there you go.  I’ve also got the CU Buffs and Xavier in the first round as well.

West:
Tom Izzo was overheard saying, “I can’t leave ball alone, the game needs me. “ Much like Jay-Z, the Michigan State Spartans just keep bringing it year after year.  This tourney will be no different.  They’ll win this region.  Elsewhere I’ve got Long Beach State (hang ten bro!) and Colorado St. in the first round.  Marquette will fall in a close game in the Elite 8.

Final Four:
Michigan State will handle Baylor with more ease than Robert Griffin handles the demanding Redskins fan base next year.  Syracuse will give it to Kansas.  Got to go with the Orange to win it all.

Okay that’s it readers.   Leave some comments, let me know your thoughts, and be on the lookout for my forthcoming article on Tim Thomas.”