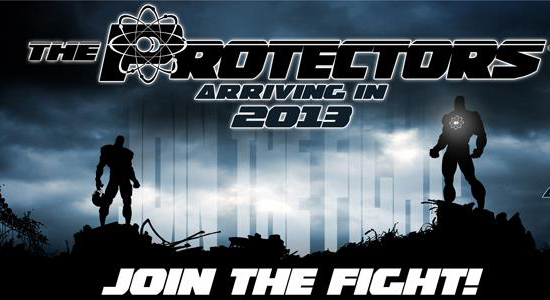 There is a common bond between athletes and superheroes that is hard to overlook.  Athletes are the modern day version of superheroes: we marvel at their abilities and their physical prowess, and cheer them on as they lead our teams to victory.  It is hard not to see the parallels between these two worlds.  What is hard, however, is trying to understand why there has never been a successful convergence of the two.  There have been numerous projects attempting to do so, but the results have been nothing short of disastrous.  There was NFL Superpro—which has been called one of the worst creations in the history of Marvel Comics—as well as the abysmal animated series, Mighty Ducks, to name a few.  But, thanks to Israel Idonije of the Chicago Bears, along with his creative team of experts that could soon change with their upcoming comic book project, The Protectors.

So, what is the story behind The Protectors?  While the heroes in the story are athletes, Idonije made it clear at New York Comic Con in October that sports is only a small part of the overall story:

Yeah, they’re athletes, but it’s not a story about sports, it’s not a story about athletes.  It’s a story about these characters who have these gifts, these abilities.  They’ve been living life—entertaining us here in the present day as athletes—but they ultimately realize that they have these gifts that were given to them for a higher purpose: to save humanity from this evil force.  Now, they are each charged with a decision to make: are they going to just continue to live the life they’ve lived as athletes, or are they going to take on the burden and cause to save humanity?  That’s really what the core of the story is.

Based on the past failures of other sports/comic book projects, one might think that The Protectors may be destined to suffer the same fate.  But, what separates The Protectors from past projects is that this team of writers and creators are aware of the challenge they face in creating a successful comic book, and in fact, they embrace it. 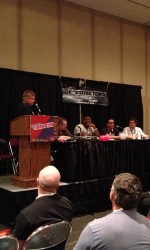 Ron Marz, head writer for The Protectors and well known for his work on other titles such as Green Lantern and Silver Surfer, also worked as a sportswriter for five years, so is familiar with both the world of comics and sports.  Marz found The Protectors to be a fascinating project, and one he feels could finally bring these two worlds together successfully, something he spoke about at New York Comic Con:

Let’s face it, any time that sports have been shown in comics, for the most part, it sucks.  They’re generally not done well.  They’re not done by guys who understand sports, or done by artists who can draw sports well.  So for me, part of the interest here was the challenge.  Here’s something that hasn’t ever been done well.  Let’s be the first ones to do that.  Let’s prove that in that Venn diagram where sports and comic geekery coincide, there’s enough space to do something like this where comic fans can pick it up because it’s a great comic, and sports fans can pick it up because that’s their way into this universe.

Marz and the rest of The Protectors team understand what makes a good comic book, but more importantly, they have an understanding of the world of sports.  They know what tripped up other people in the past, and they know what they need to do to make their comic appealing for fans of both genres.

WHY IT WILL WORK

It’s no secret that the popularity of comic books, and namely comic book films, has soared over the last decade.  This past summer, The Avengers shattered box office records—grossing over $1.5B worldwide—proving that not only do people love watching superhero films, they love watching a team of heroes fighting together as one.  Why else would Warner Bros. be fast tracking a Justice League movie other than to cash in on the superhero team wave?

This idea of creating “super teams” is not confined solely to comic books either.  In the NBA, we have seen teams like the Boston Celtics and Miami Heat assemble their own super teams to try and win a championship.  In October, Marvel Comics and ESPN The Magazine teamed up to create a comic book on Miami Heat star LeBron James called LeBron: King of the Rings.  And, if you go to the NBA online store, you’ll even find that a number of teams offer Marvel Comics hats with their team logo on it.

Sports and comics are coming together in a way we have never seen before, and The Protectors will be the perfect ambassador to lead them into the future.

For more information on ‘THE PROTECTORS’ visit Athleta Comics on Facebook