THE BENGALS & THE CURSE OF WOODY HARRELSON 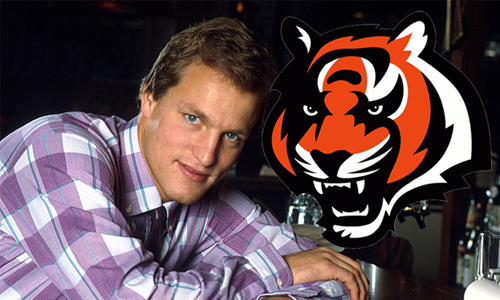 I was born and raised in New England, just outside of Boston, so the whole notion of sports curses is nothing new to me.

I heard about the infamous Curse of the Bambino growing up.  For a New England kid, hearing that story was the modern day version of hearing an ancient orator recite verses from Homer’s Iliad.  It was a rite of passage, a part of New England’s history that was passed down from generation to generation.

But then a funny thing happened: the Red Sox won the World Series.  The curse had been lifted and we were left to rejoice in our first championship since 1918.  Now that the Sox have won three World Series titles since 2004, the whole idea of a curse seems a little silly now, at least to some.

But I assure sports curses are real.  Just look at the Cincinnati Bengals.

What curse, you say?

I’ll admit, it’s not as well known or sexy like the Curse of the Bambino, but it’s real and can also be traced to one man: Woody Harrelson.

Allow me to explain.

The Bengals haven’t won a playoff game since the 1990 season, which is currently the longest drought of any team without a playoff victory.  Hell, even the Jacksonville Jaguars have had more playoff success than the Bengals in recent years.

Now the irrational fan will attribute this to bad coaching and poor drafting by management and the front office (can you say Ki-Jana Carter, Akili Smith and Peter Warrick?).  But the rational fan knows that logical excuses like these are just that: excuses.  The rational fan will see the truth, and realize that the only explanation for the Bengals’ postseason woes has to go beyond the logical and into the realm of the supernatural.  This is where Woody Harrelson comes into play.

Harrelson was born in Texas but raised in Lebanon, Ohio.  He’s a big Bengals fan to this today, so it would probably kill him to know that he inadvertently cursed his beloved franchise.  But the truth must be told.

Harrelson is a well-accomplished actor, best known for his roles in films such as The Hunger Games, King Pin, and White Men Can’t Jump.  But before all that, Harrelson made a name for himself by playing Woody Boyd in the hit sitcom Cheers.

Boyd was the lovable, yet naïve, bartender who hailed from a small town in Indiana.  And, it was this naivety that brought upon a curse that would ripple from the barstools of Boston to the gridiron of Cincinnati.

On January 6th, 1991, the Bengals won their playoff game against the Houston Oilers, 41-14.  Little did they know it would be their last playoff victory for decades.  Four days later on January 10th, 1991, a new episode of Cheers aired entitled Achilles Hill.  In that episode, Woody Boyd finds an old foosball table that Carla tells him is cursed.  She says bad things happened to people who used it.  Sure enough, at one point in the episode, Dr. Frasier Crane gets his hand stuck in the machine, and Carla has to call in a priest to exorcise the demons that possess the table in order to free Frasier.  Granted, all the priest did was pull Frasier’s hand from the table, but by the end of the show the table was neither destroyed nor dealt with.  It was simply forgotten about (like most things on weekly sitcoms).

However, Woody’s discovery of that table would prove to be the ultimate undoing for Cincinnati.  Three days later, on January 13th, 1991, the Bengals lost to the LA Raiders in the divisional round, 20-10.  They have never won a playoff game since.

So go ahead; shake your head and laugh all you want at this notion of the Harrelson Curse.  But take a look at the Bengals’ subsequent playoff appearances since that episode aired.  Who knows what role it played in the Carson Palmer-Kimo von Oelhoffen game?  All I’m saying is that come Sunday, if the Bengals should fall again in the postseason to the Chargers, we all know who to blame.

Cheers to you, Woody.