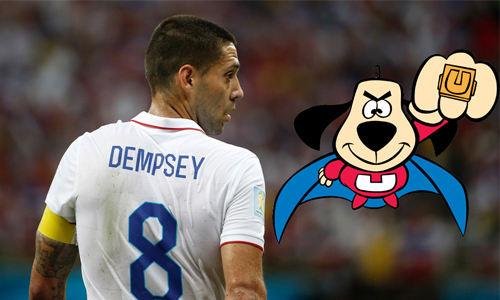 Everyone has heard of it, and every guy has experienced it at some point in his life.

On Sunday, America let out a collective groan from blue ball pain at the end of the USA-Portugal match.  We were ready to burst with joy at the monumental upset, only to be forced to suppress our euphoria like a fart in church.

The match will not be remembered for the near-historic victory that was there for the taking for the Americans, but for the last second comeback that Portugal seemingly pulled out of thin air.

The worst part was that there was very little time for fans to digest the heartbreaking equalizer.  As soon as the ball was back in play, the whistle sounded and the game was over.  It was like the ending to the Game of Thrones “Red Wedding” episode, where all you could do was ask, “Did that really just fucking happen?”

Fans and analysts alike turned to one another looking for some kind of explanation, as if the gentle voice of Morgan Freeman would be there to guide us through the tragedy and offer words of encouragement.  94 minutes of triumph and optimism were erased with one simple header into the back of the net.  Never before has a draw felt more like a loss, which says a lot considering that most fans probably would’ve been happy with a draw after the US feel behind 1-0 within the first five minutes.

Now, America must face Germany for the chance to advance.  As daunting a task as it may seem, given how close the Americans came Sunday to moving on, this is an opportunity for the team to assert themselves to the world and their fan base.  And perhaps the best way to do so is to embrace their role as the group underdog.

Team USA coach Jurgen Klinsmann said after Sunday’s draw that the Americans were reveling in their status as underdogs, hinting, too, that group favorites Portugal and Germany have been catered to this World Cup by the organizers.  Regardless of whether or not that’s true, there’s no question that Team USA enters Thursdays match as the presumptive underdog.  Not only is Germany ranked by FIFA as the second best team in the world—with USA currently ranked 13th, respectively—but they also boast striker Miroslav Klose, whose goal against Ghana tied him with Ronaldo for most career World Cup goals (15).  Germany has proven to be a powerhouse in soccer, and nobody knows that better than Klinsmann.

After an exhaustive match Sunday in which temperatures reached near unbearable conditions—the match had to be stopped briefly in the first half for a water break because the refs deemed it too hot—Klinsmann will now have just three days to get his squad ready for their Thursday match.  With bodies aching and morale fragile, Klinsmann’s best bet to get his team psyched up may be to reinforce this underdog mentality; reiterating it any way he can to drill the point home.

The challenge for Klinsmann, however, is getting his team to buy into his words and make them believe they can win.  Team USA has never been considered a serious contender when it comes to World Cup play.  In fact, before the tournament even started, Klinsmann, himself, acknowledged that talk of Team USA winning the World Cup was “just not realistic.”  Whether or not the coach was saying that to downplay expectations remains to be seen, but the fact of the matter is that Klinsmann will now have to try and convince his team that they are, in fact, capable of pulling off an historic upset.

And why not the underdog?

Underdogs have more fight in them, rising above the mental and physical fatigue that is often the downfall of talented, yet misguided teams.  The idea that talent always wins is somewhat of an antiquated notion in this day and age of sports.  Sometimes, will and determination can be the deciding motivator in a grudge match.

Klinsmann knows it’ll be an uphill battle when Thursday’s match gets underway, but Sunday’s draw may be the best thing for Team USA going forward.  They’ll have the chance to prove just how much they want this win, and how badly they want to advance.  Perhaps beating Ghana and pulling out a win against Portugal would’ve made the team cocky and unappreciative of what they had accomplished.  They may have entered the knockout rounds with a false sense of superiority, thinking they were the best team in the tournament and nothing could stand in their way.

So while Sunday’s draw may not have been the outcome the team desired, it could be a humbling experience that reminds Team USA just how difficult it is to win on the World Cup stage.  And perhaps that humbling lesson will give the underdog the necessary heart to bite back on Thursday.