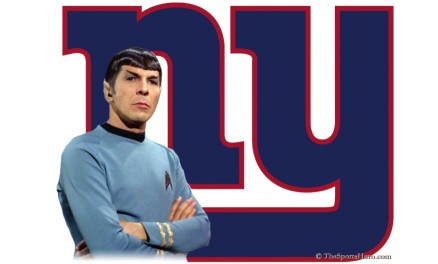 Top 3 Reasons Why The Giants Will Win

Wednesday.  Hump Day.  The festivities are in full swing here in Indianapolis.  The sound of inebriated men and women celebrating at night elicits memories of my time on Vulcan during pon farr, a barbaric mating time for us Vulcans that occurs every seven years.  Suffice it to say, I find such behavior by humans to be quite illogical.

POWER OF MOMENTUM: As powerful as emotion can be for humans, momentum can be just as effective.  The Giants have won five straight games coming into Sunday, including playoff wins on the road against the Packers and the 49ers.  This team has drawn comparisons to the 2007 New York Giants, who lost a hard-fought game to the then-undefeated New England Patriots in their regular season finale.  Despite the loss, Giants players and coaches were encouraged by their performance against the seemingly unbeatable Pats.  New York carried that momentum into the playoffs, winning road games at Tampa Bay, Dallas, and Green Bay en route to the Super Bowl where they would go on to defeat the Patriots.  This year’s team will look for history to repeat itself Sunday, and after big playoff road wins against two of the NFL’s best teams, it would be illogical to bet against them.

EXPERIENCE: As I previously stated, the Giants used the momentum and encouragement from their 2007 regular season loss to the Patriots to navigate their way through the playoffs en route to a Super Bowl title and arguably the biggest upset in NFL history.  This year’s Giants team also has one advantage over the Patriots that the ’07 team didn’t: regular season win.  Normally a regular season win would not warrant such praise on my end, but the importance of the Giants’ victory over the Patriots earlier this year cannot be overlooked.  Not only did New York end New England’s 20-game home-winning streak, but they proved once again that they have the formula needed to beat Bill Belichick and the Golden Boy.  Come Sunday, the Giants will look to that winning formula to deliver them a championship.

“ELI, ELI, O”: Before the start of the regular season, Eli Manning raised eyebrows when he said he felt he was in the same class as Tom Brady.  While many found his statement to be quite illogical at the time—myself included—there’s little reason to doubt Manning now based on the way he’s been playing.  This season, Manning set an NFL record by throwing 15 fourth quarter touchdowns, breaking the record set by Johnny Unitas in 1959 and by Eli’s older brother, Peyton, in 2006.  Manning has shown a knack for stepping up in big games, and his playoff record shows it.  He’s beaten the Patriots before, and knows that winning a second Super Bowl will silence his critics and propel him to the head of the class, right alongside Brady.

Check back tomorrow for my profile on fellow-Vulcan and New England Patriots head coach, Bill Belichick.  As always, live long and prosper.