SOLITARY CONFINEMENT: A Theory Behind Superman’s Fortress of Solitude 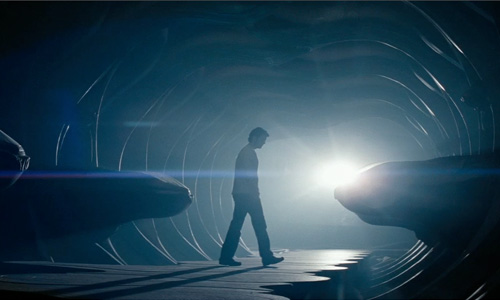 The new Man of Steel trailer hit last week and seemingly delivered the goods.  While the first trailer from December had more of a somber tone to it, this one had both emotion and action, and even offered some very juicy tidbits.  While we got a quick glance of the LexCorp Building and a great look at Krypton, what interested me most was the images of the (alleged) Fortress of Solitude (granted it’s highly unlikely it will ever be referred to as such in the actual film, but for the purposes of this article we’ll call it that).

There have already been some great rumors as to what the Fortress is.  Andrew Dyce of Screen Rant proposed an interesting theory, one which I agree with, that the fortress is actually an old Kryptonian ship that arrived on Earth well before Superman.

Is this an old Kryptonian ship trapped in ice?

After watching the trailer at least a dozen times and putting together facts we already know about the film, I’m going to expand on this theory to try and figure out what the fortress is, its backstory, and how it ultimately factors into the film.

First of all, we know that writer David S. Goyer has revised Superman’s backstory  bit.  The origin remains largely the same–scientist sends son to Earth–but this time around Krypton has a different look and feel to it.  Children are genetically engineered to be something specific, which explains Jor-El’s speech in the newest trailer where he says, “What if a child dreamed of becoming something other than what society had intended? What if a child aspired to something greater?”  It definitely has the feel of the society in the book The Giver (my wife’s favorite).  Kal-El (aka Superman) is different from other children in that he was conceived naturally, so his very existence is illegal.  So, could his being sent to Earth be more about trying to protect him from death on Krypton than it is the planet exploding?  We’ll have to see.  We also know that on Krypton, armors are built on top of tight suits, which explains why Superman’s suit looks like the traditional Under Armour spandex while Zod’s looks more menacing. 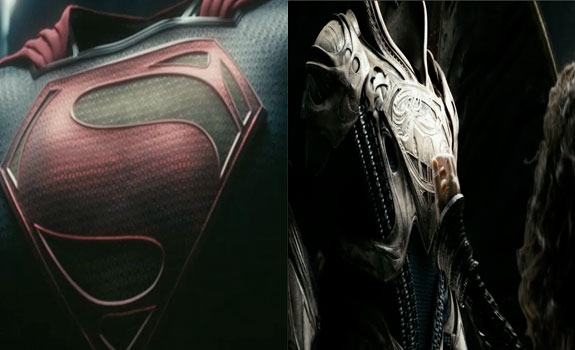 Is that Superman’s mom (right) admiring the Kryptonian armor meant for her son when he grew up?

So, how does this all factor into the Fortress of Solitude?  Here’s what I think.

I believe that the ‘S’ symbol that signifies hope on Krypton is one used mainly by scientists, like Jor-El, on all their equipment and probes: hope for a better future, a better Krypton, a better universe.  Just take a look at Superman’s capsule below in the opening of the trailer. 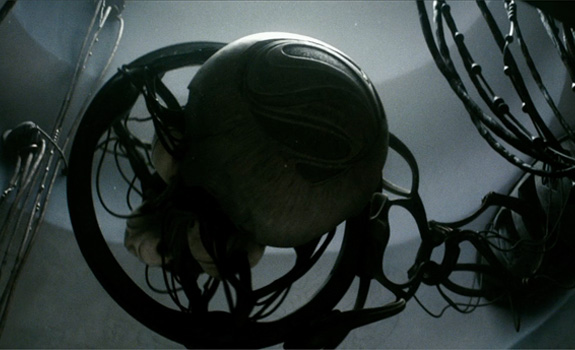 I believe that throughout Krypton’s history, scientists have traveled throughout the universe, using giant spaceships as laboratories on distant planets to study new environments, species, and whether another planet could sustain Kryptonian life in the event that something catastrophic were to happen to Krypton.  I believe the ships used in these expeditions looked like the ones seen at the beginning of the trailer, circled below. 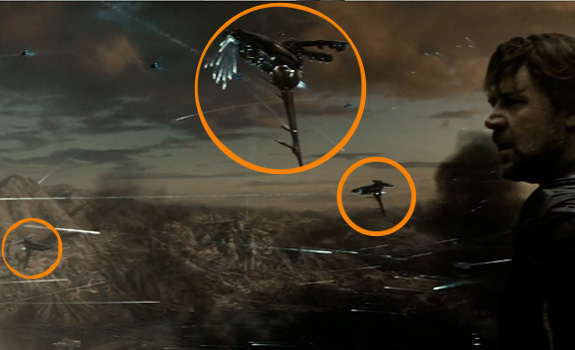 A Kryptonian science ship came to Earth and landed in the Arctic (or perhaps it crashed there and got stuck).  After a while, the scientists saw the god-like abilities the yellow sun of our solar system granted them, and felt that it offered too much power for one person, let alone an entire civilization of Kryptonians, to possess.

Now what happened next could go one of two ways: either the scientists who were a part of the spaceship abandoned it completely (why, I don’t know) or they became drunk with power and eventually developed a Zod-like complex and destroyed each other or tried to rule the planet.  The reason this might be the case is that in the trailer you hear Jor-El say to his wife of Kal-El going to Earth, “He’ll be a god to them.”  Do Kryptonians know how humans view them?  Is it possible the backstory of Krypton will have a Prometheus or Chariots of the Gods aspect to it in which humans view aliens from another world as gods?  It wouldn’t be that farfetched, but I digress…

Whatever the reason, the realization that Earth can grant Kryptonians god-like strength puts the planet on the blacklist among Kryptonian scientists (i.e. it’s too dangerous to go back to).  Only the higher ups in Kryptonian society–politicians and scientists–know about the planet Earth and what it’s capable of.  Therefore, when Krypton begins to fall apart, either from civil war or a cosmic catastrophe, Jor-El decides that Earth is the safest place to send his son.  It offers him a civilization for which he can blend into, and since Earth is a heavily guarded secret on Krypton, it would prevent any surviving Kryptonians from seeking out and killing the illegitimate son of their planet.

So how does Clark end up finding this ship fortress?  Probably in the same manner he did in Richard Donner’s original Superman movie.

I believe when Jonathan Kent finally reveals to Clark who he is and shows him his ship, there is a little ‘S’ key inside that acts like a tracking device, pointing him in the direction of the abandoned spaceship in the arctic.  It’s likely, too, that when he activates the computer, it acts like a beacon and sends out a Kryptonian signal that alerts Zod to his location, which is why his ship appears to come to the Kent Farm upon his arrival to Earth. 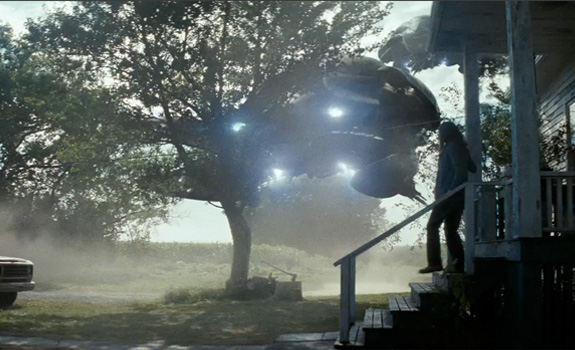 Is this Zod arriving at the Kent Farm?

It would also make sense that this ‘S’ key seen in the picture below would be a way to access and open the lab/spaceship.  Remember, in the comics Superman has a massive key that only he can lift that unlocks the door to the fortress.  Given that it looks more than a bit ridiculous, I’d say Nolan and Snyder have simplified it a bit for this movie.

Could the device on the right be a key into the fortress?

Once inside, Clark has access to Kryptonian technology and can plug his key, or perhaps another device, into a machine to communicate with a holographic image of Jor-El.  It’s here that I believe Clark will discover an unused Kryptonian suit in a display case that he’ll come to use as his own.  Given that the colors seem a bit brighter and different than other Kryptonian suits, I’m guessing there is some meaningful significance behind it.

Clark will use the ship as his own “fortress” to learn about his past, the history of Krypton, and ultimately his purpose. Jor-El talks in the trailer about how Clark will give the people of Earth an ideal to strive towards.  Maybe he is meant to fulfill the mission that the original Kryptonian scientists failed to do? 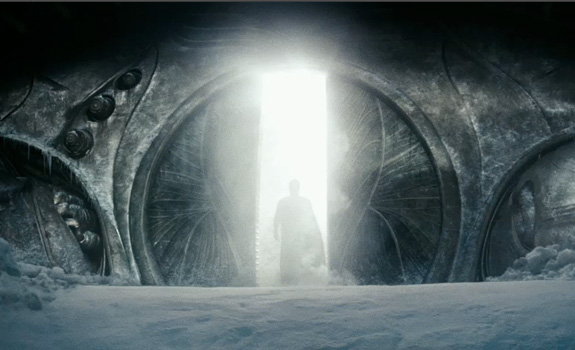 The entrance to the ship/fortress?

We don’t yet know what Zod’s ultimate plan is for Earth when he arrives, but it’s likely not good.  He either intends to rule the planet as a god, destroy it entirely, or perhaps try and recreate Krypton in his own image.  Is it possible then that the fortress in the arctic will be used for this purpose?  We saw in the trailer that he gets access to some kind of enormous Kryptonian machinery on Earth. 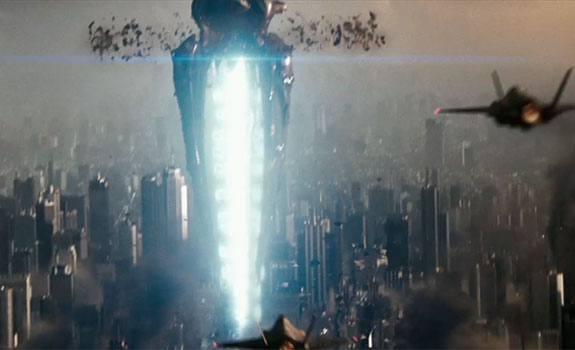 I think it is likely the fortress in the arctic is the place he gets it.  I also believe at some point, the fortress ship gets activated and the engines start firing up, melting the ice around it.  Take a look at the image below showing Superman underneath a giant beam of light similar to that above.  Notice the image circled in orange.  Could that be a part of the ship? 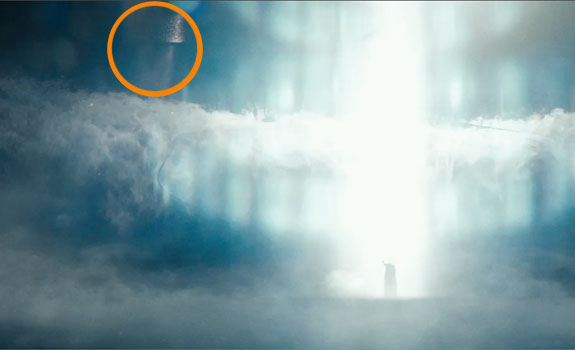 Is that part of the engine to the fortress ship?

Again, this is all conjecture at this point, and nothing will be known for sure until June 14.  Suffice it to say, this Superman movie will be unlike any we’ve ever seen before, and given that Nolan has a hand in it, we know that he’ll try his best to ground this character in reality as best he can.  It’ll be interesting to see how the Fortress of Solitude factors into the movie, and what its origin is, but one thing seems pretty certain: none of us will be disappointed.