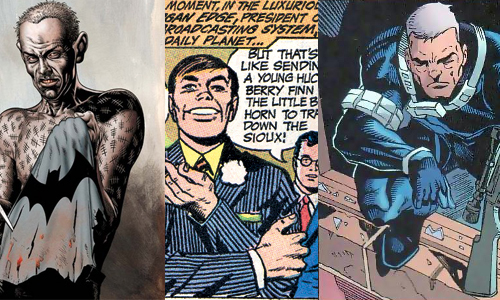 Batman v Superman: Dawn of Justice has been getting a lot of attention for all the superheroes that are in the mix for this film.  We know the titular characters will square off, but we also know that Wonder Woman, Cyborg, and Aquaman will be making appearances.  With all those characters, you’d think there’d be very little room for any more notable additions.  Well, if today’s rumor is true, we may see a lot more villains than just Lex Luthor.

Latino Review is reporting that there will be three new villains joining the film: Victor Zsasz, Morgan Edge and David Cain.  Here is some brief information on each.

VICTOR ZSASZ: Probably the most well-known of the three, Zsasz is a notorious serial killer who kills his victims with a knife and then carves a tally mark somewhere on his body to represent the kill.  We saw Zsasz in Batman Begins, and the video games Arkham Asylum and Arkham City.  Rumor has it he’s a villain Batman fights early on in the film, so most likely he is just a secondary character put into the film to give us an introduction to Gotham City and its gallery of rogue villains.

MORGAN EDGE: It’s being reported that in Dawn of Justice Edge will play a sleazy public relations exec for LexCorp who was also a fellow gang member with Luthor.  In the comics, Edge is usually portrayed as a media mogul or pundit, but he is also a part of the alien-powered mob organization Intergang, which could help connect us to Darkseid and set him up as the main antagonist in Justice League.  Scoot McNairy, who was cast last week in the film, could be a possible fit for this role.

DAVID CAIN: Cain is an assassin who helped train a young Bruce Wayne and has been an associate of Ra’s al Ghul and the League of Shadows.  The rumor is that he meets with a bodyguard of Lex Luthor’s in Dawn of Justice to set up an assassination (Bruce Wayne, perhaps?).

It’ll be interesting to see how things play out in the weeks leading up to Comic-Con.  I’m expecting some big announcement in San Diego.