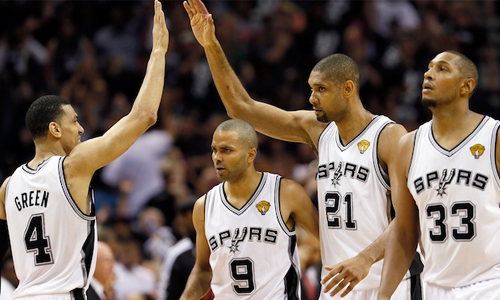 The champagne bottles have popped and the confetti has fallen.  Another NBA season is in the books, and the Miami Heat once again sit atop the NBA throne as champions.

You’ll find no shortage of storylines surrounding the Heat and their postseason run to a second straight title: Where does LeBron James rank now among the all-time greats?  Will the Heat’s “Big Three” be back again next year for a run at a three-peat?  What did Shane Battier order at Denny’s after winning the championship?   Take your pick, it doesn’t matter.  The Heat proved in Game 7 that they were the better team, making the key shots and defensive stops down the stretch when it mattered most.

For the Spurs, this series will be one filled with “what ifs.”  What if Kawhi Leonard hit those free throws in Game 6?  What if Tim Duncan had been in that game when Chris Bosh got the offensive rebound and passed it to Ray Allen?

The championship was theirs for the taking in Game 6.  Security was cordoning off the crowd in anticipation of a Spurs victory, and the Larry O’Brien trophy was being polished and rolled out, ready to be hoisted.  The Spurs could almost feel the summer sun beating down on their faces as they rode victoriously down the San Antonio River Walk to a cheering throng of fans.  Championship number five was in sight for this team, but the gods of basketball had different plans.

As I watched the Spurs walk off the court with dejected looks on their faces, likely wondering “why” after their Game 7 loss, I too, asked myself “why,” as in, why haven’t I appreciated the Spurs more over the past decade?

I’ll admit, when I was in high school and college I would roll my eyes with annoyance every time the Spurs made it to the NBA Finals.  Granted, part of my frustration and animosity towards the team might stem from the fact that I’m a native Bostonian and part of me still bemoans the fact that the Celtics lost out in the Tim Duncan lottery.  But more than that, I, like most people, found the Spurs dull and boring.  Their star, Duncan, was known as the Big Fundamental, and watching him play was about as entertaining as watching a dental hygienist take X-Rays.  There was nothing flashy or sexy about the team; no interesting storylines that tugged at our heartstrings.  To quote former NFL head coach Dennis Greene, the Spurs “are who we thought they were,” which is to say a good team that knows how to win, but alienates viewers.

Yet watching them in this year’s finals, I felt different.  After their heartbreaking loss in Game 6 and near upset in Game 7, I looked back on the run of success San Antonio has enjoyed since Tim Duncan arrived in 1997.  The Spurs have won four titles in that time, including three in a five-year span (2003, 2005, 2007).  But nobody ever talks about them as one of the greatest teams of all-time.  The word “dynasty” rarely gets attached to them simply because they never put together back-to-back championship seasons.

But seeing how great this team has been year after year is something that has to be acknowledged and appreciated.  Duncan, despite having as much emotional range as Hodor from Game of Thrones, is arguably the best power forward to ever play the game.  He’s won four NBA titles, three Finals MVPs, and two regular season MVPs.  His success is even more noteworthy because, unlike most skilled college basketball players these days, he played four full seasons at Wake Forest University instead of leaving early for the NBA draft.  He’s been the quintessential professional throughout his career and deserves even more praise and respect than he’s been given.

Watching the Spurs in this series against the Heat made me appreciate the heart and desire this team has to win.  They don’t conform to the public’s desire for being entertainers.  They’re basketball players, plain and simple, and damn good ones.

So as the Spurs ride off into the sunset that is the NBA offseason and questions inevitably loom about the team’s future, I sincerely hope that they have what it takes to make one last run at a championship.

And if they do, I’ll be standing right along the River Walk cheering them on during their victory parade.

How Steve Urkel changed the world