Check out this clip from FAMILY GUY that appeared in an episode earlier this year.

I think we can applaud Stewie, and for that matter Seth MacFarlane, for finally bringing to light the one major question regarding Batman keeping his identity a secret: how can Bruce Wayne build such a complex cave without anyone noticing?

While we’ve given this issue a pass in previous Batman movies (i.e. Burton and Schumacher’s films) it’s a hard one to ignore as we prepare for Nolan’s final outing with the Dark Knight.  After all, the thing that’s set Nolan’s incarnation of Batman apart from those of his predecessors is the fact that he’s kept his Gotham, and hero, grounded in reality.  Gone are the gaudy skyscrapers and monolithic statues gracing the skyline.  Instead, Nolan’s given us a city that has the look and feel of any modern day city (oh yeah, and no bat nipples on our hero!).

BUT WHAT’S HE GOING TO DO ABOUT THE BATCAVE?

In BATMAN BEGINS we saw how Bruce discovered it, and learned how it had been used by his great grandfather as part of the Underground Railroad.   He used it as a workstation and place to house the Tumbler, but nothing too fancy.  In THE DARK KNIGHT, Bruce moved everything to a bunker in a shipping yard while Wayne Manor was being rebuilt after Ra’s al Ghul and the League of Shadows burned it down in BB.  We didn’t need much of an explanation as to how that bunker was put together without being noticed, since all it mainly consisted of was the Tumbler and a deck of computers.

But when Bruce returns to Wayne Manor in THE DARK KNIGHT RISES, Nolan will be giving us a new-look Batcave.  Now we’ve been told from sources close to filming that the Batcave won’t be that much of an upgrade from the one in BB.  It’ll basically have computers and a place for Bruce to house his suit.  I was disappointed to hear this since I wanted a pimped out Batcave.

I then started to wonder why the cave might not be getting a major upgrade, and I came up with a theory.  Since TDKR takes place eight years after TDK, and Batman has been absent during that period, why would Bruce build a sophisticated, high-tech cave that’d just go to waste?  The only reason he’d need to put one together is when he’s called back into action (i.e. when Bane comes to town).  So, assuming this is the case, I’ve come up with a way for Bruce to put together a Batcave on the fly without drawing attention.

There’s been speculation that the Turda Salt Mines in Romania will act as the Batcave in TDKR.  Take a look at some of the photos of the mine below: 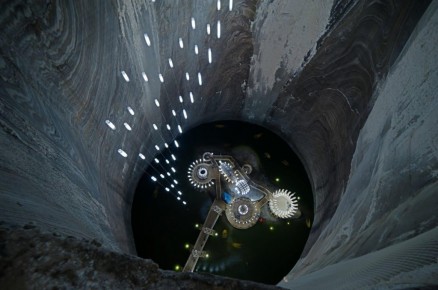 Let’s assume the only addition/upgrade Bruce made to the foundation of the southeast corner of Wayne Manor was a newer, sleeker elevator.  It wouldn’t raise eyebrows if a billionaire asked for a service elevator or escape route/panic room to be built, would it?

The one thing we know Bruce will have in his new cave is an enclosure for his suit, so I began to think he’d need one, too, for his gadgets and computers.  If the Turda Salt Mines are going to act as the Batcave, or at the very least act as inspiration for the design of the cave, then I think I’ve found a way Bruce can pull off this renovation without needing outside help.

Take a look at this picture from the Turda Salt Mines. 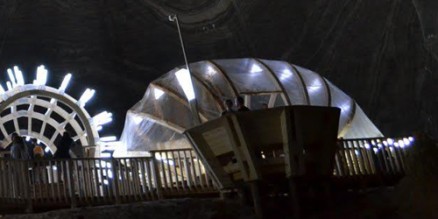 That enclosure looks like plastic almost.  If Bruce wants to build a cave within a few days, he’ll likely look for a lightweight material he can build with.  I started researching inflatable tents, and while that’s a viable option, I think I found something that matches the design above.

Below is a picture of a growing, luxurious trend, called Bubble Tents.  These can be put up in any location outdoors, including a beach, and act as a safe, comfortable enclosure. 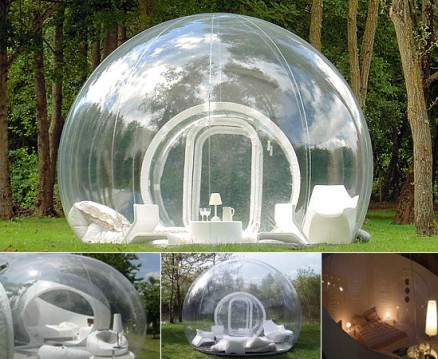 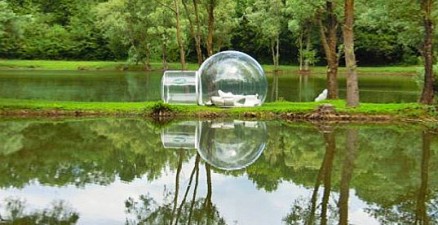 And check out the description of the Bubble Tent:

“The BubbleTree line comes in several different models for you to choose from. The Cristal Bubble is one of the basic designs, and has completely clear walls for uninhibited 360-degree views. The BubbleRoom is one of the half-opaque designs and comes complete with portable wardrobes, sofas, roll-out beds and even optional electricity for lighting.”

These rooms are easy to put together, are equipped for providing electricity, and come with portable wardrobes. Now look at the picture of Bruce with his suit below.

Maybe it’s one of these inflatable shelters with a metal/plastic frame holding it up?  Now granted, Bruce Wayne is a billionaire, so I’m sure if he got some kind of Bubble Tent it’d be top of the line with the finest material, but the overall design and concept would be the same.  While this Bubble Tent craze hasn’t caught on yet, TDKR does take place eight years after TDK, so maybe it has by then!

All of this is pure speculation, of course, and there’s a definite chance we could still get the high-tech Batcave most of us are dying to see.  I’m hoping we get some kind of information or photos of the Batcave soon, but more likely we’ll have to wait for the film’s release to see it in all its glory.

Now, there’s only one question left regarding the Batcave…how does he deal with cleaning up all that bat shit?