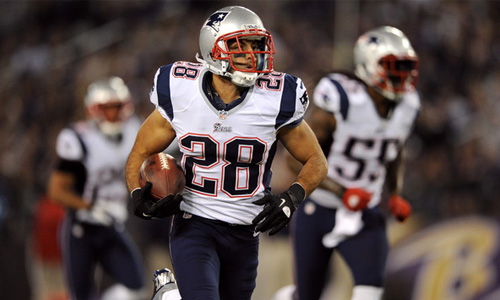 The news of the NSA surveillance scandal rocked the world this week, causing public outrage over the government’s invasion of privacy.  And, while it seems that every person and business may have been at risk of having personal information and secrets intercepted, I’m fairly confident that one organization managed to avoid this problem: the New England Patriots.

The Patriots are known for keeping things close to the chest, something that has garnered them both respect and ridicule over the years from fans and media alike.  But one thing is certain: the Patriots have been one of the most elite and successful NFL franchises of the past decade.  They are a perennial Super Bowl contender year in and year out.  From top to bottom, this organization is built to win.

I recently got a chance to speak with Patriots safety Steve Gregory about the team’s success, last year’s disappointing loss to the Baltimore Ravens, and what we can expect from the team in 2013.

TSH: After the way last season ended with the loss to the Baltimore Ravens in the AFC Championship game, what lessons, if any, do you think the team took away from that game that might benefit you in the upcoming season?

SG: It was disappointing, but you know, we got a new team out here for sure, and right now we’re just focused on getting better.  For me, it’s just running the defense and learning the things we need to in order to put together a good football team.  We’re out here working hard at OTAs, getting in shape, learning each other’s tendencies and things like that, trying to put it all together.  We’re just moving forward.

TSH: After the loss to the Ravens, Bernard Pollard and some other players started talking trash about the Patriots organization.  Where do you think that stems from?

SG: I haven’t really heard any of those comments; I try to avoid stuff like that as much as I can.  All I know is we work hard as a team and try our best to stay focused, and we’ll just continue to do that.

TSH: During this offseason, there’s been a lot of talk about the Jets, the Bills, and the Dolphins, who have been making headlines with all the moves they’ve made via free agency and the draft.  It seems almost like the Patriots are flying under the radar in the AFC East.  Is that a good thing?

SG: I don’t know.  All that other stuff is speculation.  Right now we’re just focused on getting better as a team, getting to know one another, trying to put the X’s and O’s together in our scheme and offense.  So we’re just taking it day-by-day and working hard to get better as a football team.

TSH: Tom Brady recently said that he feels like he’s throwing better than ever.  Do you think the loss of Wes Welker is going to be a blow to the offense, or do you think it provides an opportunity for other guys to step up?

SG: Every year is different.  We have new guys in there now.  Whoever’s playing, whoever’s in there has to understand the scheme and everything that’s going on, so guy’s have to go plug in and just step up and play.  Whatever team the Patriots organization puts together, we feel will be competitive enough to go out there and try to win football games.

TSH: Tom’s going to be 36 when the season kicks off, but he still seems to be playing at an elite level.  What makes him so efficient year in and year out?

SG: I know he does work hard.  He’s in here all the time, he’s a student of the game, and he puts everything he has into it.  So any time you put that combination together you’re going to get positive results.

TSH: The Patriots’ offense has always been efficient and one of the most potent in the league, but the defense has had its struggles over the last few years.  What does the defense need to do this season to take that next step to being one of the league’s top defenses?

SG: We’ve just got to understand the schemes that we’re trying to run and get to know each other and play together as a unit.  We’ve got to communicate well and try and fly around on the field and make plays.  As long as we do that, we’re going to be fine and be successful.

TSH: Back to the offense.  Rob Gronkowski had a fourth surgery on his forearm recently.  Is that a concern at all for the team or do you think Gronk will be all right once the season starts?

SG: I have no idea, to be honest with you.  I’m just focused on what I’m doing.  I’m not exactly sure what his medical situation is.  That’s something you’d have to ask the coaches or the trainers.  But he’s a great player and we hope we have him, but we’re just focused on the “now” and what lies ahead.

TSH: What are your personal goals, if any, for the upcoming season?

SG: I’m not looking too far ahead to the season, actually.  Right now I’m just focused on getting better as a football player, learning all the different personalities and teammates we have out here who are both new guys and returning guys.  I’m just looking to put everything together and have a good offseason to work off of.

TSH: Coach Belichick doesn’t seem like the most gregarious person, but he’s able to get the most out of his players.  What is he like in terms of a motivator?

SG: He preaches hard work and discipline.  He tells us to go out there and do our job and always put the team first.  He wants you to be confident as a football player, and he always tells us that hard work will pay off.  So that’s what we try to do as a team: go out there, work hard, and put it all together on the field.

TSH: Do the Patriots still have what it takes to be one of the top teams next year?

SG: We’ll see.  Every year is new.  Right now we’re just trying to figure out the things we’re learning and running in OTAs.  We’ve got a lot of new faces, a lot of new guys here in camp.  We just have to take it one day at a time right now.

TSH: The Patriots have a reputation as one of the best franchises in all of sports.  How are the new guys acclimating to the system?  Is it intimidating at all for them?

TSH: I’ll get you out of here with this last one.  We ask all athletes we interview which superhero they’d be.  Who is your pick?

SG: Probably Superman.  The guy can fly and do it all.

TSH: Are you excited for the Man of Steel movie?

TSH: Steve, best of luck to you and the Patriots in the upcoming season, and thanks for taking the time to talk with us.

SG: You bet.  Thanks again.

One-on-One with Israel Idonije of the Chicago Bears: Part 1

One-on-One with Israel Idonije of the Chicago Bears: Part 2

One-on-One with Zak DeOssie of the New York Giants