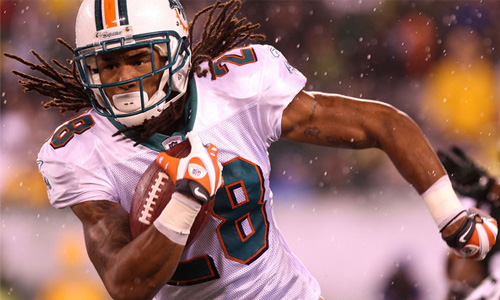 Armed with a new look and new offensive weapons like Mike Wallace and Dustin Keller, the Miami Dolphins seemed poised to make a run in the AFC East this year.  But as we know, big spending in free agency doesn’t necessarily translate into immediate success–just ask the Philadelphia Eagles.  Yet with budding young quarterback Ryan Tannehill leading the charge, the future of the Dolphins seems brighter than it has in years.

I recently got the chance to speak with Dolphins cornerback Nolan Carroll about the team’s growth during last year, their expectations for the upcoming season, and, of course, Tim Tebow.

TSH: The Dolphins finished last season 7-9, but the team showed signs of improvement towards the end.  Can you talk about last season and the growth you’ve seen in the team since then?

NC: I think that towards the end of last season, it was all about us getting more comfortable with each other, with our scheme, and with our coaching staff.  Every week was something new for us.  It was a new process for everyone, coaches and players.  So for us, it was all about everyone getting accustomed to different situations and different players, and learning how guys react to certain things.  This year, we’re just picking up right where we left off, and I think the chemistry that we built last year has really developed and we’re just continuing to grow.

TSH: The Dolphins made a lot of big moves this offseason via the draft and free agency, and it seems like now for the first time in years there are expectations for this team.  Are high expectations good for you guys?

NC: Right now, we’re not even worried about that.  We’re just worried about going out there and doing our jobs and winning games.  We’re not worried about what the expectations are from the media.  Our expectations every year since I’ve been here has been to get to the Super Bowl.  Now that we have all these new pieces, our job is to just put it all together and go out and execute.

TSH: Can you talk a bit about your quarterback Ryan Tannehill and his development since last season?  Does he have what it takes to be an elite quarterback in this league like a Tom Brady or Aaron Rodgers?

NC: I definitely think he does.  Last year was a learning experience for him.  Being a rookie and a starter and taking on a leadership role was something that I think he handled very well, and the guys know that this year, he’s the man and he’s the leader.  He’s taking command of his huddle and his team, and he’s shown his leadership out there.  As far as his skill set, he’s probably got one of the top skill sets of any quarterback in the NFL.  He can run and make every throw, and he’s accurate and athletic, too.  I think that this year is the year when he’ll put it all together.  You can see in every practice that he’s getting more and more comfortable in the pocket.

TSH: Let’s talk a bit about you now.  This will be your fourth year in the league, and each year you’ve made tremendous strides.  What are some of your personal goals coming into the season and can you talk about your development from your rookie year to now?

NC: Every year has just been a learning experience for me.  I’ve played more games in the NFL at cornerback than I did in college.  So for me, every game, every year, has been a new experience: getting out there, being in different scenarios, going against different receivers.  Every year has been something that I’ve been trying to build upon.  This year coming in, I just want to get on the field and be able to contribute and make plays.  That’s all.  I don’t have a set mark for stats or anything.  I just want to go out and make plays and have fun.

TSH: What are things like in training camp right now in terms of chemistry among the players and new guys?

NC: I think the chemistry is good.  Between the younger guys and the vets it’s good, for sure.  We’re accepting the new guys and trying to help them out because it’s rough coming in your first year because you don’t know anybody and it’s a new environment.  You’re trying to learn new things everyday, and trying to soak everything in, so for us as veterans we’re just trying to help those younger guys out because we’ve all been in that situation and we just want to help them out.  Ultimately, that bonding is what will help make our team better in the long run.

TSH: Can you talk a bit about Coach Joe Philbin?  What’s he like as a motivator?

NC: I think he’s a good motivator.  He tells it to you like it is.  He doesn’t sugarcoat anything.  He’s going to motivate you the best way possible.  Last year, he went through the whole year and season just telling us, “keep working hard, keep grinding it out and you’ll always get positive results.”  For us going through the practices, he always makes sure we’re always prepared for everything: the different scenarios in games, and the stuff that he’s seen other teams go through, too.  He tries to acclimate us to that so that when we go out there on Sundays we’re very prepared for any situation that we come across.

TSH: With all the talk usually centering around the Jets and the Patriots, what do the Dolphins need to do to become the class of the AFC East?

TSH: So do you think this team has the talent and mental makeup to get to the playoffs this year?

NC: I definitely think we do based on everything we’ve gone through this past season and the work we’re putting in right now.  This is the time; this is the time where we all just need to step up, and for guys to do their jobs and just go out there and have fun.  Just lay it all on the line and just execute.

TSH: Since you’re in the AFC East, I’ve got to ask if you have any thoughts on Tim Tebow being in New England now.

NC: [Laughs] Oh, man, it’s just another thing we have to prepare for.  And Bill Belichick knows we have to do that too, which is another reason why he did it: it’s just another thing teams have to scheme for now.  Tebow’s a dynamic player, he’s a leader, and I think somehow, some way, he’ll help that team out.  And we’ll figure out once we play them what they’re planning on doing with him in their offense.

TSH: So are you glad to see Tebow get another chance to make it on a team?

NC: Yeah, I am.  For a guy that’s scrutinized for no real reason—I mean, he’s a proven winner—so for him to get scrutinized as much as he does, it sucks, but I’m happy he got another shot.

TSH: So what do you think of the new Dolphins logo?

NC: I like it.  For me, personally, I’m always under the helmet so I’m not always looking at it.  But I think it’s a good logo; a nice change to something different.  People have started to expect it, too, so I think it’s nice.

TSH: Our website combines sports and comics, so we always have to ask our interviewees this one question: if you could be one superhero, who’d you be?

NC: Wolverine.  I love Wolverine.  Actually, my brother used to have the Wolverine comics, so I would read all of them.  That’s actually how I got into it.  I wasn’t really a fan until he started reading them.

TSH: So are you looking forward to the new Man of Steel movie coming out this Friday?

NC: Yeah, definitely!  If they have one at midnight on Thursday I’m definitely going to try and go to that.

TSH: Nolan, thanks for taking the time to talk with us, and best of luck in the upcoming season.

NC: Thanks, appreciate it.

Don’t Ever Go Against The (Patriots) Family