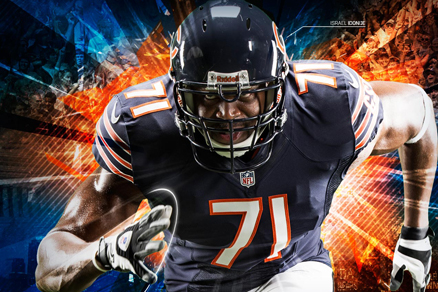 The Chicago Bears, thanks in large part to their stellar defense, entire their bye week at 4-1, tied for the division lead in the NFC North.

But that’s not the only thing that has Israel Idonije of the Bears excited this week.  Come Saturday, he and his creative team will unveil their comic book project, The Protectors, at New York Comic Con. (6:30PM Room 1A14 or Booth 3032).

You can check back next week for an in depth overview of the project and series, and why this comic book has what it takes to be the next big thing.  Until then, check out part two of my interview with Izzy where I get his thoughts on The Avengers, Christopher Nolan’s Batman trilogy, and what he thinks about a Justice League movie.

TSH: Let’s get into some good comic book talk.  I know you are a big comic fan.  Before we talk about your project with Athleta Comics, I wanted to get your thoughts on some of the big summer blockbusters.  First and foremost, what’d you think of The Avengers?

IZZY: It was outstanding.  I’ve seen it three times, it was great.  They did a phenomenal job bringing everything together and just making it really exciting and hilarious at the same time.  It was action-packed, it was funny, and definitely one of the best comic adaptations we’ve seen.  The attention they gave to develop each character in their own individual film really paid off and it was great to see it all come together in the way it did.

TSH: What’d you think of The Dark Knight Rises?  I for one was so excited to see it but felt a little let down by it.  What were your thoughts?

IZZY: I loved it, I thought it was amazing.  I love Christopher Nolan’s Batman.  I love everything about it.  It’s disappointing that it’s the last one, but I loved it and how they kind of put everything together and tied it up [in TDKR].  I thought Catwoman (Anne Hathaway) was the best Catwoman to play the role, so hopefully they can get her back in whatever they’re doing next.  I wasn’t sure about Robin—I’m still waiting on my verdict for that.  So, we’ll see what happens next.  It’s going to be interesting, just to see how they bring the whole [Batman] world together knowing that ultimately they’re trying to bring together a Justice League.

TSH: What are your thoughts on that?  The reports right now are that they are going to reboot Batman first in Justice League.  Do you think that’s a good idea?

IZZY: Yeah, I think so.  I think ultimately you can’t just throw it out there.  You have to be able to piece the universe together and make it relevant to the audience.  Batman is a character that everyone already connects with, so I think they should bring this new Batman back however they want to do it.  I hope they keep the same Batman voice.  So you bring him back, bring in the new characters and fold them in and introduce the audience to those new characters.  Granted, as long as this new Batman is as engaging as this last trilogy that we had the fortune of watching.  Batman Begins, The Dark Knight, The Dark Knight Rises, I mean, as a trilogy it’s one of the best.

TSH: Do you think it’s risky though?  You look at how Marvel did it.  I mean, Thor and Captain America were kind of hooky characters, but they did a great job developing them.  We’ve seen DC try and develop Green Lantern, which was just a disaster, and then they’d have to introduce Flash and Wonder Woman, too.  Do you think they should go the Marvel way and make individual movies first instead of making a movie with everyone?

IZZY: I mean, I think that would be a better plan because you actually buy in to each character, and that’s what every movie is about: it’s about connecting with your audience.  You want your audience to buy into the characters, believe in the stories, and identify with what’s going on in those stories.  So, telling each individual story and then piecing them together and making the whole universe make sense would ultimately be the right play.  But, I doubt that [Warner Bros.] is patient enough to sit through that whole process, but we’ll see.  They pay a lot of people a lot of money to do those things and make those moves, so hopefully whatever approach they take and whatever route they take will work.  With Green Lantern—if you are a Green Lantern fan—I mean, I would’ve cast it differently.  I like Ryan Reynolds, but he just wasn’t that character for me.  But, I actually liked Green Lantern.  I actually liked the story.  There were definitely some things that I would’ve done differently.  It lost a little bit of something part way through the movie, but at first, when they start off, they were on the right track, but it just didn’t pan out.  But we’ll see.  Hopefully, [Warner Bros.] looks at the model of how some of these other movies were done and can copy it.  Regardless, I’m going to watch.

TSH: Let’s talk about your project: Athleta Comics.  How did it come about and what is the project exactly?

IZZY: Athleta Comics is our company for comic books and great properties that I hope to unveil here in the next few years.  It really started in 2007 when I created a property, and it was during training camp that I said, “I want to create this story,” and we kind of put it all together and it was great.  So, I actually reached out, with no direct contacts, to Marvel and DC through their website and their general “Contact Us” links and I said, “Hey, this is what I’m doing.  I have this great story that I’m interested in,” and they were both like, “We’re not interested at this time, but thank you.”  So I was like, “Okay,” and I left it alone.  And then, in 2009, I got connected with a great writer, Will Watkins, who wrote the entire story for me and he turned it into this dynamic piece.  Mark Bright then joined the team and he did the bible for us and it was great, and now Ron Marz is rewriting the story and we have Bart Sears who’s going to be doing the illustrations.  And then, October 13th, we are going to present the story at New York Comic Con–Saturday, 6:30PM Room 1A14 or Booth 3032, make sure you stop by!  And then, the full story will be ready early 2013.

TSH: That’s fantastic.  So where did your love of comics come from?

IZZY: You know, when I was a kid, somebody gave me a Green Hornet comic, and so I grew up reading Green Hornet and Iron Man.  I was a big Spider-Man fan, and that’s kind of where it started: as a kid, collecting my little comic books.  We had a little comic book shop I used to ride my bike down to and I would run around in there like a kid in a candy store.  Just that feeling when you walk in; you’re just overwhelmed by all the books and all the stories and you pick one up and you start reading through it.  The world of comics is amazing.  It gives you that fantasy, that escape that opportunity—especially as a kid—to associate and to live in the shoes of these enormous and amazing characters, that’s what it’s about.  So that was something that I definitely loved and that we hope to do with our stories.

TSH: So then I’ve got to ask: if you could be one superhero, who’d you be?

IZZY: Wolverine.  I mean, I love Wolverine, and for some reason I’ve always loved Colossus, so I’d probably be a character like that.  How about yourself?

TSH: Well, for me, Green Lantern is my favorite superhero because I love the creative aspect of the character.  I would probably say either Green Lantern or Captain America.  A lot of athletes I’ve spoken to have said Superman, but I feel like he’s too easy an answer because he can do everything.

IZZY: When you ask that question, you have to take Superman out of it because Superman is incredible.  He’s the ultimate superhero, so you can’t really include him.  And, speaking of Superman, I’m hoping that movie [Man of Steel] is amazing because the last one was terrible.  They missed the boat on that one.

TSH: Last thing I want to point out, and you don’t have to answer this if you don’t want, but I’ve looked at Roger Goodell, and personally, I think if you put a top hat and monocle on him he looks like the Penguin.

IZZY: [Laughs] I don’t know about that one.  Put that one together and let’s take a look at it.

True Hero: The Comic Book You Need To Be Reading