He sucked as Green Lantern, but Ryan Reynolds seems poised to make a triumphant return to the comic book universe as Marvel’s Deadpool.

The film isn’t scheduled for release until February 12, 2016 (the perfect Valentine’s Day date movie), but filming is underway now in Vancouver, Canada. Today, we have a fresh new set photo showing Reynolds in his Deadpool costume, which all fans can agree looks insanely badass. The image comes courtesy of TMZ. 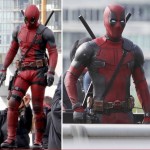 For those who can’t wait until 2016 to see Reynolds in action, be sure to watch the video below, which is the test footage for “Deadpool” that “accidentally” got leaked and helped get the movie green-lit thanks to the overwhelming support of fans.