We’ve seen several images of Henry Cavill as Superman recently, but we’ve yet to see an official one of Amy Adams as Lois Lane.  It’s not like anyone has been complaining though, since we did get a good look at her at the end of the most recent trailer, and let’s be honest, there’s nothing too compelling about seeing someone dressed in civilian clothing, right?  Well, this new official image proves that point.  It’s a black and white shot of Lois Lane at–what is presumably–the Daily Planet.  I’m guessing the black and white photo was a decision made to try and quell the controversy surrounding director Zack Snyder’s decision to cast a redhead as Lois Lane.  Still, I think Adams is a great actor and will easily make people forget about the hair issue.  Remember how outraged people were when Daniel Craig was cast as Bond back in 2005 because he was blond?  You don’t hear anyone complaining about his hair now. 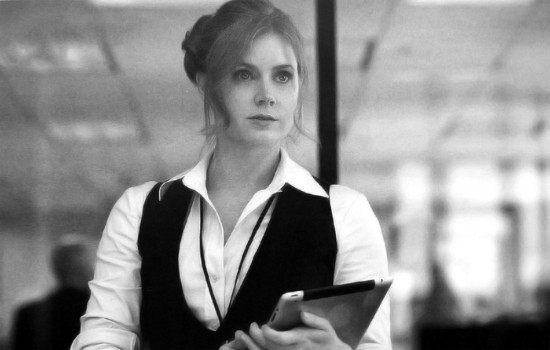