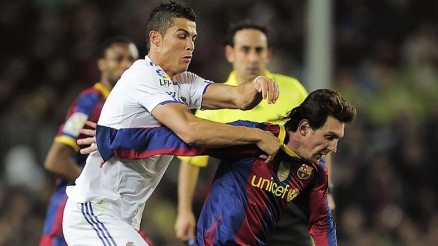 A morality war is being waged on the football pitches of Spain and throughout Europe.  This struggle is not a traditional war of Good vs. Evil, but an argument about the very genealogy of morality.  I recently read an article describing Cristiano Ronaldo as the “Ubermensch”, or Superman, as described by 19th century German philosopher, Friedrich Nietzsche.

Essentially, Nietzsche contends that morals as we know them have been imposed on the western world by the Judeo-Christian establishment.  He says that at their most basic level, humans are driven by instinct.  The most basic instinct is, of course, the need to survive.  Thus “good” is simply someone able to act on instinct and prosper.  The rich landowner is “good” due to his comfortable lifestyle and desirable amenities.  His theoretical mistreatment of his workers and others in society is beside the point.  In fact, that lowly worker is “bad” because he is scraping to get by, not able to act on instinct or live out his dreams.

Nietzche’s Superman exists in the form of Portuguese Winger Cristiano Ronaldo.  Ronaldo is quite possibly the most perfect footballer of all time.  He possesses every conceivable skill on the field, has the Hollywood good looks, and the fattest paycheck in the game.  He truly exerts his instinctual might every week by leaving opposing teams in the dust and filling millions of women worldwide with lust.  Ronaldo’s greatness is nearly unmatched (Nietzsche’s morals are proving true).

One man and one team stand in Ronaldo’s way of global domination.  Lionel Messi and his mates at Barcelona have been the one side able to foil Ronaldo and Madrid.   Compared to the impeccable Cristiano, Lionel is flawed.  He’s short, goofy looking, and only plays with his left foot.  I would contend, however that if Ronaldo is Nietzsche’s Superman, then Messi is the embodiment of “good” as described by the Judeo-Christian world.  On the pitch he’s selfless, graceful, and determined.  He puts the needs of the team over his personal ambitions.  His club is the one major team in Europe that for years declined corporate sponsorship on their jerseys for fear of compromising their ideals and purity.

The question before us now is which set of morals is true?  How does Cristiano, with his instinctual and physical superiority, stack up against Messi and his selfless, humble style?  Since this morality play exists in the world of sports, we must judge the virtue of each player based on their on-field performance.  The primary goal of any athlete is to win the contest.  In team sports, personal accolades are secondary.  So how do these two football heroes stack up against each other?

Messi and Ronaldo have played against each other in La Liga (Spain’s top flight) for the past two and a half seasons.  They have also competed against each other in other domestic and continental competitions.  Over that time period, Barca and Madrid have faced each other 11 times.  Lionel’s side has won six, tied four times, and lost only once.  Furthermore, over that same time span Barcelona has won two league titles, two Champions League Titles (Europe’s most prestigious club competition), and several other major titles.  Cristiano’s charges have only won one Copa del Rey (a secondary competition in Spain).

The Catalonians clearly reign supreme.  But which player is the more spectacular, individual performer?  In soccer, there’s only one statistic that really matters: goals.  Both men are prolific goal scorers.  Over the above-mentioned time span Ronaldo has scored 111 goals in 112 games (0.99 goals per game).  Messi has scored 129 goals in 134 games (0.96 goals per game).  The production of about a goal per game is almost God-like in the typically low scoring game of soccer.  In this regard, both men are about equal. As a team Messi and his mates are clearly superior.  Do these triumphs indicate the superiority of a certain philosophy? Do Messi’s selfless and humble actions and subsequent success indicate that Judeo-Christian morals are superior to Nietzche’s philosophies of the uncompromising, instinctual Superman?  From a sporting perspective, these two young stars still have many years to face each other.  Clearly Messi has the early advantage, but we must wait for the completion of this saga to make an ultimate judgment.

In order to guide our thinking we can look back on prior struggles.  Another epic saga was waged long, long ago in a galaxy far, far away.  As all you geeks know, I could only be talking about Star Wars.  In terms of personal attributes, I believe Cristiano Ronaldo mirrors Anakin Skywalker (later Darth Vader) while Messi recalls Luke Skywalker.

Initially, Anakin was anointed as the “Chosen One.”  His potential was limitless and he was hailed as a savior of the Jedi Order, and in fact, the whole galaxy.  Some members of the Jedi Counsel were conflicted because they felt he could be easily influenced.  In addition to being a first-round draft pick as a Padawan Learner, he was also a thrill-seeking, hot-tempered, lady-killer (Padme was DOPE).  Does this sound like a particular Portuguese football star we know?  As we all came to find out, Anakin was manipulated by the sith to join the Dark Side, eventually morphing in the infamous Darth Vader. 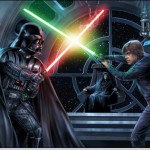 Luke on the other hand was less heralded than his father.  He was a diminutive, soft-spoken, almost reluctant leader.  But he proved unyielding in his convictions.  He put others’ needs before his own and protected the Republic.  He never yielded to the Dark Side and even rescued what good was left in Darth Vader before his death.

In this instance, Luke and the Jedi prevailed.  Luke proved a much more effective and reliable Jedi than Anakin.  So far, Lionel has prevailed over his more Sith-like competitor Cristiano.  But that comparison really only speaks to personal traits. What historical references exist within the world of sports?

As a Boston native, and long time Celtics fan, one historic rivalry comes to mind: Russell vs. Chamberlin.  The battles between Bill Russell and his Celtics against Wilt Chamberlain and the Philadelphia Warriors/76ers and Los Angeles Lakers were epic.  Throughout the 1960’s these two battled for basketball superiority.  For the sake of comparison, Russell is like Messi and Chamberlain is like Ronaldo.

Like Messi, Bill Russell was very team oriented and selfless.  He was a staunch defender and rebounder and started many of the team’s fast breaks with outlet passes.  He always put the needs of others and the common good above personal gains, and this approach paid tremendous dividends.  Russell is the most successful athlete in American Pro Sports History.  His Celtics won eight NBA titles in a row and a staggering 11 championships in 13 years.  He even acted as player-coach for the 1969 NBA Champions who overcame Wilt Chamberlain’s Lakers in seven games in the Finals.  Russell was also a five-time NBA MVP and 12 time all-star.

Chamberlain, on the other hand, excelled as an individual.  He owns the all-time mark for points per game in his career (30.1 tied with Michael Jordan).  He is a 4 time NBA MVP and 13-time All-Star.  However, he only won two NBA championships.  Of those, his team only overcame the Celtics once (in 1967), and had to wait for another championship until after Russell retired (1972).  Chamberlain was selfish and flashy.  Like Ronaldo, he was a true ladies’ man.  In fact, some estimate that Wilt the Stilt slept with over 10,000 women in his lifetime! 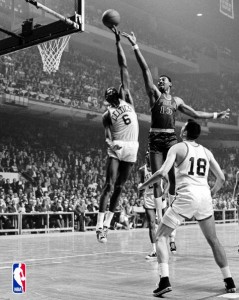 But the question remains as to who was the better player?  While modern stat-heads will point to Chamberlain’s gaudy numbers and personal signs of dominance, isn’t the objective to win games and championships?  Any rational fan will tell you that greatness is defined by winning, and NO ONE won more than Russell.  By this definition the selfless, team oriented player was much more successful.

The Russell-Chamberlain comparison is useful because it shows a complete career arc of two of the all-time greats.  While both brilliant in their own right, I’m sure Wilt would trade all of those points scored for a few more rings.  Will Messi and Ronaldo follow a similar career pattern?  Only time will tell.

Throughout human history philosophers, theologians, comic book geeks, and sports fans have argued about human nature and morality and how they can relate to success.  From Lionel Messi, to Luke Skywalker, to Bill Russell, the most successful figures have exemplified many Judeo-Christian conceptions of good, and they have achieved greater success than Ronaldo, Anakin, and Chamberlain.  At this point I’d have to give the nod to our common Western morality as being truer than Nietzsche’s flawed (yet fascinating) conception of good.

This morality play will continue in stadiums across Europe for years to come.  My parents often spoke of watching Russell take on Chamberlain.  Years from now, I’ll be telling my kids and grandkids about the epic war of football and morals waged by Lionel Messi and Cristiano Ronaldo.