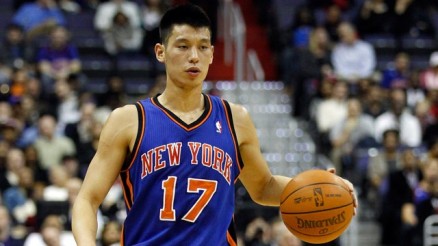 The clock has run out on Tebow Time and the dawn of the Lin Dynasty has begun.  Unless you’ve been trapped in the Amazon or are a New England Patriots fan who has avoided ESPN for the past week, you’re aware of the meteoric rise that Jeremy Lin of the New York Knicks has been on.

Lin has helped the Knicks reel off six-straight wins after Tuesday night’s victory against the Toronto Raptors, averaging 26.8 PPG, 8.5 APG, and 3.8 RPG during that stretch.

What Lin’s done over the past week is unlike anything we’ve ever seen before.  Rags-to-Riches, Cinderella story, David vs. Goliath are all terms that have been thrown around when describing Lin, but this guys deserves a category, and for that matter, expression of his own.

I can talk about what Lin’s ascension means to the Asian-American community, the NBA, and NBA fans worldwide, but I’m going to be selfish here and talk about what Jeremy Lin has meant to me.

I come from a biracial family.  My mother is Korean and my father is of Irish and Italian descent.  Needless to say, growing up in rural New Hampshire in the 1980s, you did not encounter many children who shared a similar family heritage.  I was constantly asked if I was Chinese by almost every kid in my class, since apparently that was the only Asian culture the pre-Internet children of the ‘80s were aware of.

A month before I moved to Massachusetts at the age of nine, my parents signed me up for the YMCA Youth Basketball League in our new town to help me make news friends.  While I met a more diverse group of kids there, I still found that I was one of the only Asian kids in the league.  As the years went by, the youth basketball league turned into the Traveling Basketball League, which called for tryouts and cuts.  Basketball slowly began to become more and more competitive, and fortunately for me (and my body) I was able to keep up.

Then came high school basketball.  I went to private school and played on the varsity team my junior and senior years.  As my team and I traveled across New England on the weekends for games, I started to get a taste for just how bad the racial stereotypes against Asians playing basketball really was.  Taunts about math, playing the violin, speaking Chinese—which is ignorant considering there is no language called Chinese—were just a few of the things I heard.

Now I realize it’s customary for high school kids to tease the opposing team to a certain degree—hell, I’d be a hypocrite if I said I never did that—but once race comes into play the line has been crossed.  For me, I got a fair share of Yao Ming and Wang Zhizhi chants during my school playing days, and what bothered me the most was that no matter how hard I played or how many baskets I made, opposing fans could not look past my race.

So when Jeremy Lin burst onto the scene last week, I couldn’t help but smile when I saw the amount of attention and recognition he was receiving from both fans and NBA players, alike.  Even stars like Kevin Durant can’t help but cheer for this underdog.  During the Knicks’ 92-85 win over the Lakers last Friday, Durant posted on his Facebook account, “Jeremy Lin is killin it! Have you seen him play yet? Happy for him!”  And how can you not be?

Watching the fans at Madison Square Garden rise as one for Jeremy Lin last Friday against the Lakers was a sight to see.  With every shot made, every rebound grabbed, and every assist completed by Lin, the crowd became more and more unified in their support for this underdog from Harvard.

It’s rare for us to see an NBA star with Asian heritage.  When Yao Ming made his NBA debut with the Houston Rockets back in 2002, fans got a glimpse of the first real NBA star that came from an Asian background.  Yao’s popularity, and that of the NBA, soared overseas in Asia during Yao’s years in the league.  The NBA hoped to strike gold again when Yi Jianlian (whose real age still remains a mystery) was drafted sixth overall by the Milwaukee Bucks in 2007, but he appears to be nothing more than a bust at this point.

So with Yao’s retirement and Yi’s failure to reach expectations, the Asian community had little hope of seeing another Asian NBA star in the foreseeable future.  And then Lin appeared, seemingly out of thin air.  Whether or not Jeremy Lin can continue playing at this level once Amar’e Stoudemire and Carmelo Anthony return remains to be seen, but there is one thing we can continue to hope for: that as Jeremy Lin and other athletes from multicultural backgrounds continue their rise, racial barriers and stereotypes in sports will hopefully begin to fall.

May the Lin Dynasty have a long, and prosperous run.