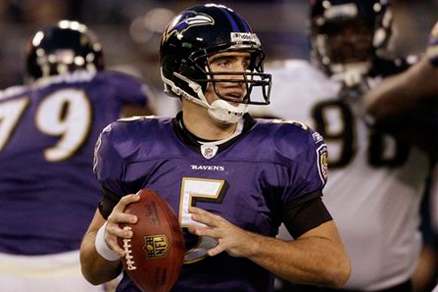 Have you ever heard a word so many times that it starts to not even sound like a word?

That’s what’s happened to me with the word elite.  Sure, we all know what it means: to be the best at what you do.  Yet lately, for some reason, it seems that some people have forgotten the definition.  At least, that’s the conclusion I’ve come to after listening to sports talk radio over the past few days.

Every sportswriter and sports radio host I’ve listened to has thrown the word elite around so much it’s become more worn out than Kanye West’s copy of the Kim Kardashian sex tape.  The “elite” person in question has been the much-maligned, and often heavily criticized quarterback of the Baltimore Ravens, Joe Flacco.  Flacco had a big game on Monday night, going 21-for-29 for 299 yards and two touchdowns in a 44-13 blowout win over the Cincinnati Bengals.  After the game, Ravens’ head coach John Harbaugh praised his quarterback’s play, and, yes, referred to him as elite.

Now don’t get me wrong, Flacco is a decent quarterback.  He’s taken the Ravens to the AFC Championship Game twice in his first four seasons, and has at times shown brief flashes of brilliance.  But let’s hold off on calling him elite.  We tend to over-analyze a football player’s performance after just one game.  Yes, Flacco was impressive Monday night, but it’s the first game of the season.  Let’s see how he follows up his hot start next week against the Philadelphia Eagles.  Inconsistency has been a word often used to describe Flacco’s erratic play.  Remember, in Week 3 of the 2011 season, Flacco threw for 389 yards with three touchdowns and no interceptions against the St. Louis Rams only to follow that up next week by going 10-for-31 for 163 yards and one interception against the Jets, completing just 32.3 percent of his passes.

Flacco has been a serviceable quarterback for most of his NFL career, not an elite one.  The Ravens have entrusted him to move the ball down the field and limit his turnovers, and, for the most part, Flacco has done a good job.  But, he’s never really been considered the franchise quarterback by either the fans or the organization.  Had the Ravens considered him one they’d have signed him to a contract extension by now, or at least squashed the notion that they aren’t going to.  And, let’s be honest, the Baltimore offense has never revolved around him, and in past seasons everyone knew it was Baltimore’s vaunted defense that gave them the best chance to win a Super Bowl.

So, why are sportswriters, radio hosts, and even the Ravens’ head coach so ready to call him elite after just one game?  Have we forgotten how easily a great defense and strong running game can mask the shortcomings of an inconsistent quarterback?  It’s like how special effects and big action scenes tried to mask the fact that Batman was barely in The Dark Knight Rises.

Flacco is good, probably even one of the top 15 quarterbacks in the league.  He has the potential to be a championship caliber one, too, but he needs to consistently perform at the level he did on Monday night week in and week out before we can even consider calling him elite.  We need to wait until he makes that game-winning throw with the season on the line.  We need to wait until he’s hoisted that Lombardi Trophy over his head.

Or, at the very least, we need to wait until at least Week 2.