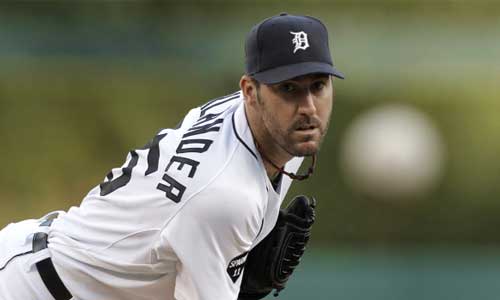 It looks like it’s a very Good Friday for Justin Verlander.  The Detroit Tigers ace has agreed to a new contract with the ball club that could exceed $202 million, according to ESPN’s Buster Olney.

Verlander’s new deal would easily make him the highest-paid pitcher in the game today.  The deal is for seven years and worth $180 million with a vesting option for an eighth year that could put its total value at $202 million.  Verlander’s new contract comes just a little over a month after Seattle Mariners pitcher Felix Hernandez agreed to a new seven-year contract worth $175 million.

Verlander, 30, won the AL Cy Young Award and MVP back in 2011 when he went 24-5 with a 2.40 ERA and 250 strikeouts.  He’s established himself as one of the game’s most dominant pitchers since his first full season in the league back in 2006.  Last season, Verlander went 17-8  with a 2.64 ERA and 239 strikeouts and finished second in Cy Young voting to Tampa Bay Rays pitcher David Price.  He also helped the Tigers reach the World Series for the second time since 2006.