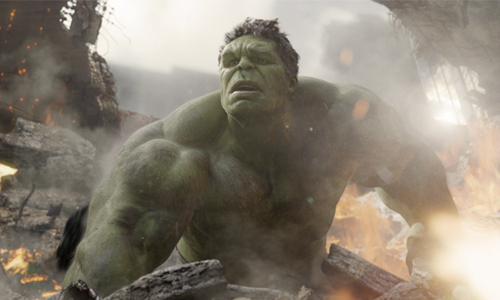 We’ve seen the Hulk in three films in the past decade: Hulk (2003), The Incredible Hulk (2008), and most recently, The Avengers (2012).  Despite the marginal success of the first two, the Hulk’s popularity soared last summer after Mark Ruffalo’s turn as the not-so-jolly green giant, and people began speculating as to whether or not the Hulk–and more specifically a Hulk movie–factored into Marvel’s Phase Two plans.

While Kevin Feige himself has said that the idea of another solo Hulk film has been floated around–although not until after The Avengers 2–there has yet to be any concrete word out of Marvel confirming this.  Some have speculated that a solo movie would center around the storyline of Planet Hulk in which Bruce Banner is banished from Earth and ends up on a desolate planet, but those reports are now said to be “1,000% inaccurate,” mainly due to the fact that in Planet Hulk Banner’s human side is practically nonexistent so it would be a waste of Ruffalo’s talents.

So, will the Hulk get his own film again?

Well, according to Avengers director Joss Whedon, it seems unlikely.  Whedon was recently asked at the Glasgow Film Festival if Ruffalo would get his own Hulk movie, and his answer may have thrown a wet blanket on fans’ burning desire to see such a film:

Yes. But it would be very, very hard. Hulk is a tricky son of a bitch. He’s the Claudio of superheroes. Because the problem is it’s a very popular character, but it’s not a superhero. Half of it’s a superhero, half of it’s a werewolf. And you can’t structure it like a superhero movie, you can’t light it like a superhero movie. How do you develop that? It would be extremely difficult. The one thing you would have in your favour would be Mark Ruffalo. But right now I don’t know if they have plans to do that or not, because he works so well as part of a greater whole, but by himself, it’s tough. I don’t envy the guys who went before.

Whedon hits on a great point that fans have known for a while but have been unwilling to fully accept: the Hulk is not a real superhero.  He is a Dr. Jekyll/Mr. Hyde character, whose greatest enemy is himself and his ongoing battle for identity.  The Hulk is a complex character that hasn’t translated well on the big screen.  The only real time we’ve seen Hulk act like a true hero was at the end of The Avengers, and keep in mind we got no explanation as to how he was able to finally control himself.

When Stan Lee created the Hulk back in 1962, he wasn’t thinking about future franchise films centered around the character.  He created an exciting new character who didn’t fit the traditional mold of a hero, but at the same time couldn’t be classified as a villain.  The Hulk was a character in his own class, and as we saw from both Hulk and The Incredible Hulk, it’s hard to find that balanced medium between man and monster.  As Whedon pointed out, the Hulk definitely seems to work better as part of whole rather than by himself.

So if the Hulk doesn’t get his own film, where does he go from here?

Well, we know for a fact that he will be back in The Avengers 2, and Ruffalo himself tweeted the other month that Whedon has some exciting things in store for Mr. Green.  Also, a photo recently came out showing designs for Iron Man’s Hulkbuster armor, which could indicate an upcoming battle between Stark and the Hulk.  Personally, I’m hoping Marvel uses The Avengers films to rebrand the Hulk and build him up as a hero, so when the trilogy ends they can spin him off into his own solo franchise.  It’ll certainly be a challenge to make a successful Hulk film, but one thing working in Marvel’s advantage is that they now have the right actor in Ruffalo who can bring emotional depth to this complex character.