Jesse Eisenberg is Lex Luthor in ‘BATMAN VS. SUPERMAN’ 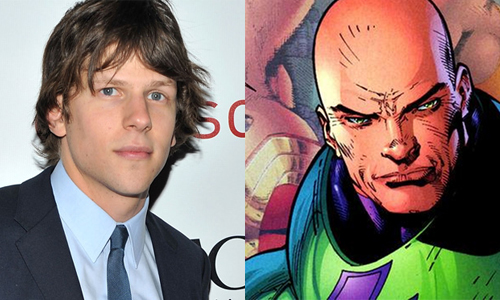 Yup, you read that title correctly: Jesse Eisenberg will be taking on the  role of legendary DC villain Lex Luthor in Zack Snyder’s Batman vs. Superman.  Along with the announcement came the news that Jeremy Irons will be playing the role of Alfred.

I think Irons is a phenomenal choice to play Bruce Wayne’s infamous Butler.  Not only is he a great actor, but he can have a calming onscreen presence that demands our attention and respect.  I can’t wait to see his interaction with Ben Affleck.

As for Eisenberg?  Well, let’s just say I’m not as thrilled.  While he is certainly a talented actor, I think the decision to cast someone so much younger than both Henry Cavill and Ben Affleck is a horrible choice.   What makes Luthor such a worthy nemesis to Superman is that he is intellectually superior to the Man of Steel in so many ways.  He has years of experience and business acumen behind him.  Making Luthor a seemingly rich, young Zuckerberg seems like the dumbest casting choice since Ryan Reynolds as Hal Jordan (I still haven’t forgiven you DC!).  Not only that, but Eisenberg isn’t exactly the most physically imposing actor around.  While Gene Hackman and Kevin Spacey  both turned in fine portrayals of Luthor in previous films, you never  felt that they could take on Superman in a fight.  DC needed an actor whose Luthor was physically equal to Supes.  It’s what made Daniel Craig such a great James Bond and Cavill a great Superman: you got the sense that they could both beat the shit out of you with or without cool gadgets or superpowers.

While there was a lot of backlash over the Ben Affleck casting, the idea has grown on me more and more to the point where I am actually excited about seeing him as Batman.  This Eisenberg casting doesn’t feel right at all and I seriously doubt I am going to come around anytime soon.  Maybe the studio delayed the release of the movie by almost a year so we could have time to get over this news.  If you ask me, this movie is starting to feel more like Dumb vs. Dumber than  Batman vs. Superman.