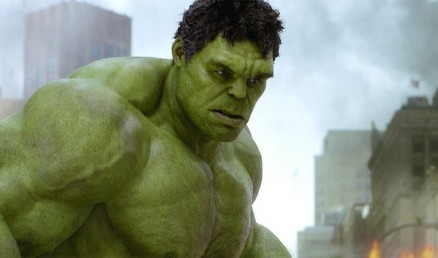 ‘THE AVENGERS’ has once again claimed the top spot at the box office this weekend, earning an estimated $103.2M in just it’s second weekend on screens here in the states.  The reviews have been great and the fan reaction stellar.  The CEO of Disney even announced last week that early development has started on ‘THE AVENGERS 2,’ which likely won’t hit screens until 2015 at the earliest.

While many of us may be disappointed by the fact that we’ll have to wait three years for a sequel, we still have plenty to be excited about in the meantime.  Marvel has its slate full for the next few years with ‘IRON MAN 3’ and ‘THOR 2’ set to hit theaters in 2013, and ‘CAPTAIN AMERICA 2’ opening in April of 2014.  There’s also talk of an ‘ANT-MAN’ movie from Edgar Wright and even a ‘DOCTOR STRANGE’ movie at some point.  But one name noticeably missing from Marvel’s slate of superhero films is one we know very well: the Hulk.

While the Hulk’s popularity has soared since the release of ‘THE AVENGERS,’ it still remains to be seen if he’ll get his own film.  Paul Gitter, the President of Consumer Products for Marvel, recently told Forbes they’ll look at creating a new Hulk movie in 2015, but given that that is when ‘THE AVENGERS 2’ is projected to hit theaters, and the fact Kevin Feige himself seems skeptical, I have doubts Marvel will make a Hulk film the priority over ‘THE AVENGERS 2’ in 2015.

However, after seeing ‘THE AVENGERS’ several times and reading the rave reviews Mark Ruffalo has been receiving for his portrayal of Bruce Banner—all of which I agree with—I’ve come up with three reasons why Marvel has to give the Hulk another shot, if not in 2015 then definitely beyond.  See if you agree after the jump.

LOOKS MATTER: Marvel finally got it right in ‘THE AVENGERS’ in terms of the Hulk’s look.  Having the Hulk resemble the actor portraying Bruce Banner was an important part of making this Hulk more relatable and likeable than previous incarnations.  It was something producer Kevin Feige said they’d avoided in the past; a fact he pointed out last summer in an interview with the Los Angeles Times.

“It was something we actively avoided before. Hulk was Hulk, he’s not any one actor and Hulk should look like Hulk. It was like Iron Man’s armor, in a way.  It wouldn’t change depending on the actor wearing it. But we’ve taken a different approach because Hulk is Banner and, frankly, we came to question our approach. Why are we not doing it this way?”

It took Feige and Marvel long enough to realize this, but I have to say, it was worth the wait.  Seeing Mark Ruffalo’s features on this new Hulk helped me connect with Banner more, and that made me root for him and understand his struggle better.  Having a guy like Edward Norton transform into a green monster that looks nothing like him at all created a disconnect for me when I watched ‘THE INCREDIBLE HULK’ back in 2008, and I know I’m not the only one who feels this way.

With a fresh new look now, Marvel has created a Hulk we can all get on board with and cheer for going forward.

IT’S NOT EASY BEING GREEN: Let’s face it, the Hulk is one of the more polarizing figures in the Marvel Universe.  While he’s one of the most popular and recognizable characters, it’s hard to really define him as a hero.  The Hulk is basically a rage-fueled monster, and as we saw in ‘THE AVENGERS’ on the Helicarrier, he’ll attack anyone in his path, good or bad.  I know there’s a lot of debate over how he controlled himself at the end, and while an explanation would have been nice, I let it slide because for once we got to see the Hulk in the role of a true hero.  Yes, he still had anger and an attitude (especially towards Thor, though that was for laughs) but it wasn’t as extreme as we’ve seen before.  If Marvel can create a Hulk film where the Hulk can be full of rage, but have it aimed in the right direction (i.e. at enemies), then they’ll have the recipe for a strong, successful Hulk franchise that can become a summer tentpole for them for years to come.

THE MAN INSIDE THE MONSTER: As I stated in my last piece, 5 Burning Questions from ‘THE AVENGERS’, I felt Mark Ruffalo was the star of the film.  His portrayal of Banner was spot on, and the depth and vulnerability he brought to the character was something we hadn’t gotten before from either Eric Bana or Edward Norton.  For once, we felt Banner’s pain and saw the internal struggle he was going through trying to suppress “the other guy” while at the same time still trying to do good for the world.  The portrayal of Bruce Banner is as important to the Hulk being successful on screen as the Hulk’s appearance, if not more so.  Ruffalo proved with his performance that he can bring a new dimension and emotional depth to Banner that we haven’t seen before, and I for one can’t wait to see more of it.

The Hulk’s appearance in ‘THE AVENGERS’ marks his third major big-screen appearance.  While Kevin Feige has stated recently [prior to Gitter’s comments] that Marvel has no plans right now to bring Hulk back in his own solo film, Marvel would be crazy not to now that they’ve found the right actor for Banner and the right look for Hulk.  After all, third time’s a charm.