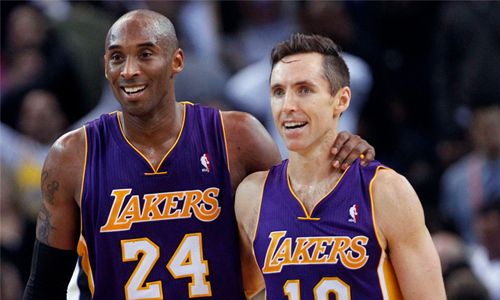 The Lakers have been somewhat of an enigma this season.  After assembling a slew of talent in the off-season in the likes of Steve Nash and Dwight Howard, the Lakers were seen as the team capable of shifting the proverbial scales of power in the Western Conference away from the Oklahoma City Thunder and in their favor.  But, things didn’t go as planned once the season started.  After a 1-4 start and a coaching change, things were still off course with this team.  Many people attributed it to age and a lack of depth on the bench, but head coach Mike D’Antoni stood by his belief that once two-time MVP Steve Nash returned from a leg injury, the offense would pick up.  Some thought D’Antoni was holding on to days past; the glory years in Phoenix in which he and Nash orchestrated what can only be described as the most prolific and electrifying offense the NBA has ever seen.  But, since Nash’s return, it’s become clear that D’Antoni’s assertion that Nash would reignite this offense wasn’t all that crazy.  And, it’s become clear that when placed alongside Kobe Bryant, Nash and No. 24 have the makings of the dynamic duo that lead the Justice League: Batman and Superman.

You have the Aquaman-like player who runs around the court out of place with limbs flailing (Paul Gasol).  Then, there’s the player who sprints up the court with the ball—like the Flash—at such speeds that you just close your eyes and pray he doesn’t crash or go out of bounds (the artist formerly known as Ron Artest).  And, of course, you have a player who, like the Green Lantern, is just happy to be on the team: Darius Morris.

It’s no secret that Batman and Superman are polar opposites on the superhero spectrum.  Superman is the alien without a home; the man who can do it all and is so perfect that he can’t even lie.  Then there’s Batman, the dark, disgruntled superhero who turned a family tragedy into a quest for vengeance against the scum of Gotham.  But, the main thing that separates Batman from Superman is the fact that the Dark Knight has no real superpowers.  Of all the members in the Justice League, Batman is the one who operates solely on intellect and his array of cool gadgets.  He can’t fly, can’t conjure up green constructs with his imagination, and can’t sprint at supersonic speeds.  Yet Batman remains one of the most popular superheroes of all time, and one of the clear leaders of the Justice League.

Kobe Bryant and Steve Nash are the embodiment of Superman and Batman for the Lakers.  Bryant has proven time and time again that he is not only the Superman of this team, but perhaps of the entire league.  His resume speaks for itself: a 14-time All-Star, a league MVP, five-time NBA Champion, and a two-time Finals MVP—just to name a few.  Bryant has carried this team ever since the departure of Shaquille O’Neal in 2004 and shown he can do it all, whether it’s hitting game winning shots or scoring 81 points against a team from Canada.

Conversely, Steve Nash is the Batman to Kobe’s Superman.  Without Nash in the lineup, the Lakers went 12-13.  Since his return against the Golden State Warriors on December 22nd, they are 3-2, and while Nash and his teammates are still building their on-court chemistry, it’s been clear that the team, and more importantly the offense, are finally headed in the right direction.  Since his return, the Lakers have been averaging 107 ppg as opposed to 103 ppg without him.  While the four point differential may not scream improvement, those numbers are expected to grow as Nash becomes more familiar with the offense.  And, like Batman, Nash has no real powers.  He’s not the fastest or most athletic guy on the court, but what he lacks in physical prowess he more than makes up for with mental toughness and an innate ability to fit the ball into any hole (that’s what she said).  In his five games since returning to the Lakers’ lineup, Nash has averaged 12.2 apg.  More importantly, Bryant has averaged 34.2 ppg in those five games.  Bryant himself admitted recently that he feels he’s playing his best basketball in years, and coach D’Antoni seems to believe that the addition of Nash to the Lakers’ lineup will help Bryant in the long run.  After their Christmas Day win over the New York Knicks, D’Antoni said he felt his star point guard could extend Bryant’s career another “five or six years.”

While the start of the season didn’t go exactly the way the Lakers envisioned it would, they seem to be righting the ship as the New Year begins.  Yes, there will still be some bumps along the way as Nash reinserts himself into the starting rotation.  And, while there are still issues that need to be resolved, namely the depth of the bench, one thing is certain: with Steve Nash and Kobe Bryant playing the roles of Batman and Superman, this Lakers team of heroes is in good hands for years to come.

Behind The Steel Curtain: Official Breakdown of the ‘MAN OF STEEL’ Trailer

THE PROTECTORS ARE COMING