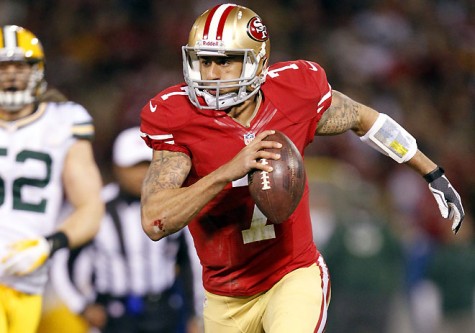 Colin Kaepernick and the San Francisco 49ers have reached a deal on a six-year contract extension worth more than $110M, including a record $61M in guaranteed money, sources told ESPN’s Adam Schefter.

The announcement comes after months of negotiations, and will keep Kaepernick in a 49ers uniform through the 2020 season.  The quarterback was scheduled to make $1.073M this season, but will now have a new deal to take into a season where the 49ers are moving into their new home, Levi Stadium.

Kaepernick was a second round draft pick in 2011 out of Nevada and, after taking over for an injured Alex Smith in 2012, led the 49ers all the way to Super Bowl XLVII.  Last season, Kaepernick led the team all the way to the NFC Championship game before falling to the division rival Seattle Seahawks.

While the 49ers knew they were going to have to break the bank to retain Kaepernick, the $61M in guaranteed money seems like an awful lot for a player who has only played one full season in the league.  Even though Kaepernick has shown signs of improvement since taking over the starting job, it seems a little risky to invest so much in a guy who still needs some polish in his game.  I guess the Niners believe that Jim Harbaugh and the coaching staff have Kaepernick headed in the right direction.