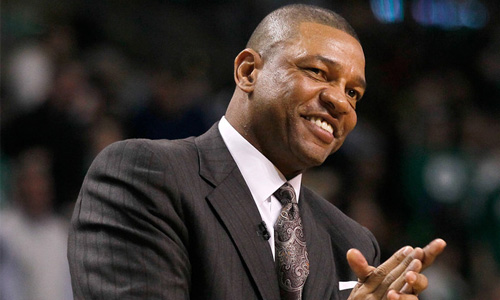 The Doc is headed west.

After days of posturing, negotiating, and having a bigger on again, off again relationship than Ross and Rachel from Friends, the Los Angeles Clippers and Boston Celtics have finally agreed to a deal that will send head coach Doc Rivers to the Clippers in exchange for a 2015 first-round pick.  The Clippers will sign Rivers to a three-year, $21 million contract.

With the acquisition of Rivers, sources have told ESPN that the Clippers now feel confident that point guard Chris Paul will sign a new five-year max contract with the team once he becomes an unrestricted free agent on July 1.  The Clippers are likely to continue their pursuit in acquiring both Kevin Garnett and Paul Pierce from the Celtics to pair them up with Paul and Blake Griffin.

Rivers brings a wealth of championship experience with him, having guided the Boston Celtics to two NBA Finals appearances during his nine-year tenure with the team, winning the championship in 2008, the Celtics’ first in 22 years.