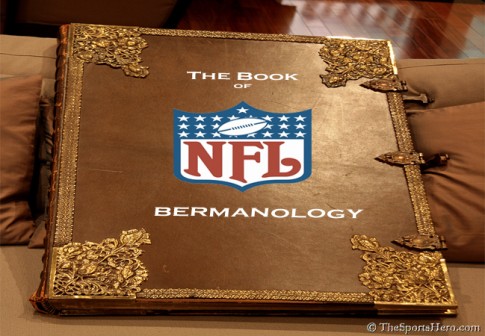 Chris Berman has been hosting Sunday NFL Countdown on ESPN for over 25 years.  He’s a mainstay at the network, synonymous with NFL pregame shows, and, over the course of his career as a sportscaster, has received such honors as National Sportscaster of the Year, Best Cable Sportscaster, and even induction into the Pro Football Hall of Fame.  But one thing people have overlooked about Berman is that he can be credited with the invention of a new word: BERMANOLOGY.

Let’s do a breakdown of the term BERMANOLOGY.

Berman is a master of puns.  It’s one of the best parts about watching NFL Countdown and NFL Primetime.  Berman has given us such classics as:

– Tom a Story of a Man Named Brady

Bermanology can range from simple one-word puns, to rather lengthy ones (as seen above).

In honor of Chris Berman, and the start of the 2011 NFL season, which got off to a stellar start last weekend, I’ve decided to create my own list combining Bermanology with Comic Books Heroes.

Like Berman’s names, mine will range in length, and I’ll do my best to explain the reasoning behind each one. 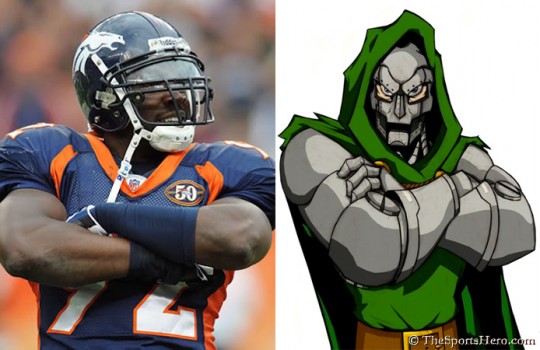 By far my favorite.  While his last name is actually spelt D-U-M-E-R-V-I-L, it’s pronounced DOOM-ERVIL.  I mean, the guy’s last name actually has the word DOOM in it!  How cool is that, especially for a defensive player as good as him?  Considered undersized (5’11”, 258 lbs.) when he came out of college, Dumervil wasn’t selected until the Denver Broncos took him in the fourth round of the 2006 NFL Draft.   In his first four years in the league, Dumervil racked up 43.0 sacks, including 17.0 in 2009.  Prior to the 2010 season, Dumervil suffered a torn pectoral muscle during practice, and was forced to miss the entire season.  Back and fully healthy for 2011, Dumervil is still only 27 years old, and it’s safe to say that after a year of watching from the sidelines, he’s ready to send opposing quarterbacks to their doom.

Bill Belichick is like a master realtor.  Whereas a relator can take a crappy property and make it look like it’s worth a million bucks, Belichick can take a crappy collegiate backup quarterback and make him look like he’s worth $62.7 million (the total from the six-year contract Cassel signed with the Chiefs after he was traded from the Patriots in July 2009).  There’s a reason Cassel was a career backup at USC.  Last season’s success was an anomaly for Cassel and the Chiefs, made clear by a 30-7 blowout loss at home to the Ravens in the first round of the playoffs.  And how did the Chiefs fare in their home opener last Sunday against Buffalo?  How about a 41-7 trouncing by the Bills.  That means that in their last two home games, including the playoffs, the Chiefs have been outscored 71-14 by their opponents, and Cassel’s average passer rating from those two games is 42.45.  It looks like the only one Cassel will be punishing this season is the Kansas City fan base.  But cheer up KC, if Cassel keeps it up, you’ll be in line to draft ANDREW JUST MY LUCK. 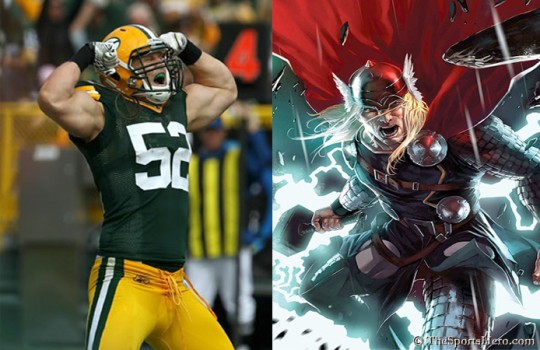 I know, there’s nothing in Clay Matthews’ name that can actually be used as a pun with Thor.  I went back and forth on this one.  I originally had CLAY CALL ME CLAYFACE MATTHEWS since both Matthews and the Batman villain like to smother their opponents.  But when you watch Matthews play, he not only looks like a Norse warrior ready to pillage the nearest village (23.5 sacks in his first two years as a linebacker), but he actually looks like Thor.  Granted, you could say that about any big white guy with flowing locks, but when you see the intensity with which Matthews plays, and read about the determination and work ethic he’s had since high school, you can’t help but think that this guy’s skills and motivational drive are otherworldly.  When Matthews steps onto a field, he brings the thunder…and the noise. 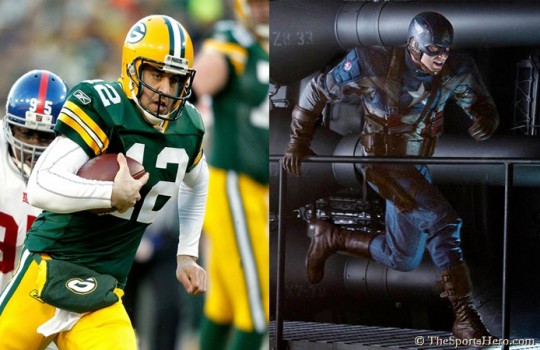 I know it seems like I’m contradicting myself here by comparing Aaron Rodgers with Captain America, since I just wrote a piece on how Captain America and Tom Brady are basically the same person.  But if you think about it, Rodgers shares several similarities as well.  Rodgers had to go to junior college for a year out of high school since no D-1 schools offered him a scholarship, thinking him too small.  When he came out of Cal in 2005, he dropped in the first round of the draft all the way to pick 23, after being projected to be the number one overall pick by his hometown San Francisco 49ers (who, ironically, passed over Tom Brady in the 2000 NFL Draft).  Rodgers has also had to deal with the offseason tango dance that is (although, I guess now I can finally say was) Brett Favre drama.  The guy never said one negative thing about Favre, or the situation.  He stayed focused on football, and being the Packers’ new leader.  How’d that turn out? 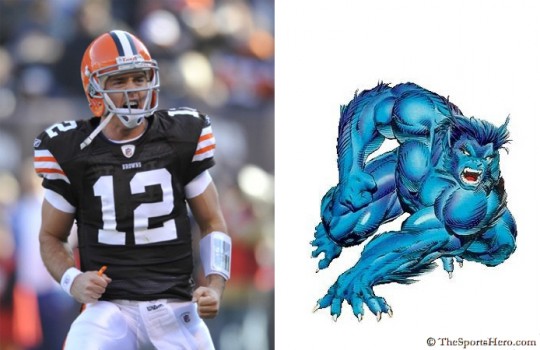 Another one of my favorites.  There are several similarities between Cleveland Browns QB Colt McCoy and his superhero counterpart, Dr. Hank McCoy, a.k.a. Beast from X-Men.  First and foremost, they are both cerebral.  Colt McCoy showed during his tenure at the University of Texas how well he could manage an offense, read defenses, and improvise on the fly.  McCoy holds nearly every UT quarterback record, including most career wins (45), touchdown passes (112), and total career touchdowns (132).  The guy’s a winner, and knows what it takes to get the job done, much like Hank McCoy, the brains behind the X-Men team.  As [Colt] McCoy begins his first full year as a starter for the Browns, Cleveland fans can only hope that on the field, he too, is a Beast. 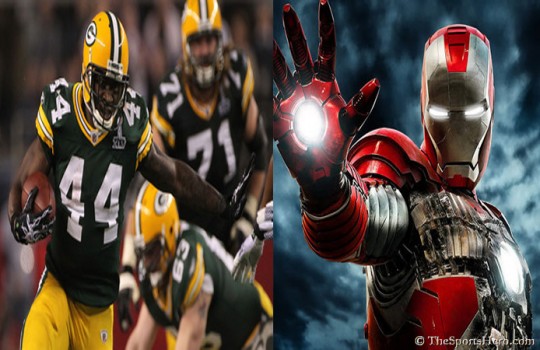 Starks came out of nowhere last season to help the Packers win the Super Bowl.  After Ryan Grant went out with a season-ending ankle injury in Week 1, it looked as though the Packers would be without a running game the entire season.  But when the playoffs came around, the Packers relied heavily on Starks to help them establish the run and open up the field for Rodgers and his receivers.  Starks responded by totaling 315 yards rushing on 81 attempts in four playoff games.  Just as Tony Stark was given a new life at the beginning of Iron Man, James Starks gave new life to the Packers’ running game. 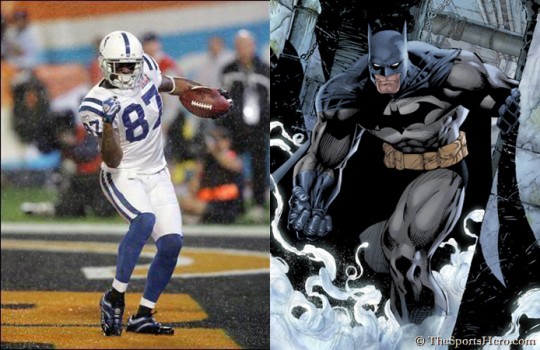 Yes, Chris Berman already came up with a Batman-inspired nickname for Reggie Wayne: REGGIE WAYNE, STRAIGHT OUT OF THE BATCAVE.  But come on, any chance you get to make a Bruce Wayne/Batman reference with a player, you got to do it, right?

WILL THE FLASH, BARRY ALLEN

Will Allen may not be that well known, so you may be wondering why I picked him for this list.  Well, he’s a solid cornerback and just got re-signed by the Miami Dolphins this week after they terminated his contract beginning of September.  Calling him The Flash is a bit of a stretch, but let’s just say that after what happened to Benny Sapp, the Dolphins better hope Allen can provide some much needed speed to their secondary. 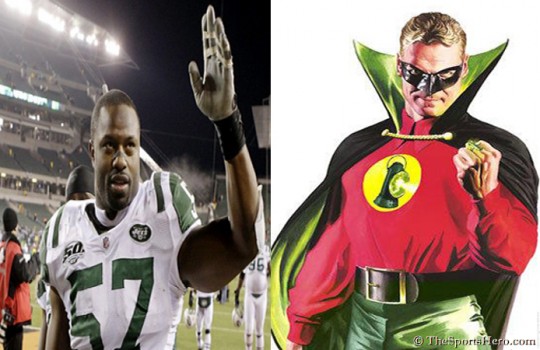 This one hurts me for a few reasons.  First, I hate the Jets.  I’m a Patriots fan.  Always have been, always will be.  I’ve got to hate the Jets.  No excuses.  Any Patriots fan who says differently isn’t a true Patriots fan.  What makes this nickname even more painful is the fact that a.) Green Lantern is my favorite superhero of all time, and b.) it actually suits Bart Scott.  While Scott shares his name with the original Green Lantern, Alan Scott, his personality is actually on par with that of Green Lantern, Hal Jordan.  If you saw the Green Lantern movie this summer, you only got a small taste of who Hal Jordan really is.  Jordan is a cocky S.O.B., which may be putting it lightly.  He can run his mouth with the best of them, and never backs down from a fight.  In fact, he’s often the instigator of fights.  If you reread those last two sentences and substitute “Bart Scott” for “Hal Jordan”, you’ll find you’re basically talking about the same person.  Oh yeah, and they both wear green…Go Patriots. 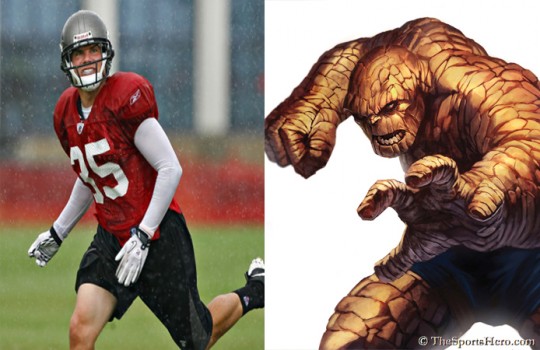 Cody Grimm may not be an impact player, yet, for the Tampa Bay Buccaneers, but I couldn’t resist dropping a BEN GRIMM reference here.  For those of you who don’t know, Ben Grimm is the real name of The Thing from Fantastic Four.  You’ve got to love the potential for comparisons down the road between these two.  Think about it.  An NFL safety who can deliver punishing, rock-solid blows to opponents, and his last name is Grimm, just like the rock-solid superhero?  It doesn’t get much better than that.  Cody is a solid player, too.  As a defensive player at Virginia Tech, he recorded 214 tackles, 11.5 sacks, and nine forced fumbles during his collegiate career.  And what works in Cody’s favor is that NFL success is in his blood.  Cody is the son of Hall of Fame offensive lineman, Russ Grimm, who currently serves as the assistant head coach/offensive line coach for the Arizona Cardinals.  Hopefully, Cody can continue to progress at the NFL level so I can make Ben Grimm references for years to come.