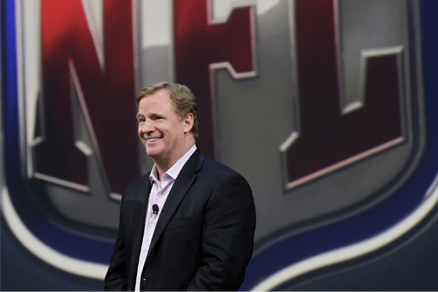 I sit here, writing this on my laptop as I watch what can only be described as the worst ending to a football game in Monday Night Football history, and for that matter, NFL history. This issue with the replacement referees has reached its breaking point and the integrity of the game is at stake. I understand that if you put on a top hat and monocle you’d look like the Penguin, but that doesn’t mean you have to be a real life villain here.

Now, I’m not naïve. I understand there is a lockout with the referees and that the NFL is a business, but concessions have to be made here, especially after what we just saw tonight. The replacement referees you are putting on the field are a joke. And, not a funny one you tell at cocktail parties, but rather a raunchy and offensive one that makes you cringe when you hear it. Unless you are planning on making a Keanu Reeves movie about the replacement refs, they’re serving no purpose whatsoever.

After every tackle, every pass, and every run, I become anxious knowing that a flag is soon to follow. It’s reached a point where it would be better to just stop the season than let it continue in such an egregious fashion. There has to be an asterisk next to this year’s Super Bowl winner. That way, people will know that the championship was won during a season where an incompetent group of men dictated the outcomes of games in such an obvious manner.

You also need to look at the people paying to watch these games. How can you expect fans to pay full price to see such a watered down product? I love the NFL more than anything, but I am ready to give it up and I know I’m not alone. With all the money the league is making from TV deals, endorsements, and ticket prices, you owe it to every fan out there to reimburse them for what you’re making them watch.

As I’m watching Aaron Rodgers answer questions now about the replay I see on the bottom-line on ESPN that you were involved in the negotiation sessions with the referees that broke down on Sunday. I’m glad that you’re involved, but we need results—and fast.

These replacement refs are a pure joke. And I’m sorry, but I’m not going to say, “Well, they’re doing the best they can, let’s not be too hard on them.” The fact of the matter is, they’ve brought this on themselves as a result of your inability to get this issue with the referees resolved. Replacement refs are like the copycats dressing up and fighting like Batman in The Dark Knight. Yeah, they look the part, but when push comes to shove they’ve got no leg to stand on.

Listen, Mr. Goodell, I understand that the NFL is a business to you, but for the fans it’s more than that. It’s an opportunity for friends and family across the country to stay in touch through things like Fantasy Football. It’s a chance for people to escape the mundane routine of their workweek and actually look forward to Monday Nights. But, most of all, it’s a chance for people to enjoy a game they’ve watched and loved all their life—up until this season, that is. Now, I doubt you’ll ever read this, but I’m confident this message is one shared by every NFL fan out there, and you can’t tune us out forever.

Aaron Rodgers’ answer to the question about the replay sums up exactly how I feel about this NFL season:

One-on-One with Israel Idonije of the Chicago Bears

One-on-One with Scott Chandler of the Buffalo Bills