Ok, I’ve had enough time to let this rumor marinate.  When I learned Sunday night that Christopher Nolan was rumored to be coming aboard as producer for a Justice League movie with Christian Bale coming back as Batman, I was filled with all sorts of emotions.  At first, I couldn’t believe it.  I was in utter disbelief.  Just to hear the names Nolan, Bale, and Batman again in one sentence was enough to pique my interest; but, to hear that they might be coming back to team up with Henry Cavill’s (Man of Steel) Superman, got me thinking about whether this was a good idea or not.

Warner Bros. had reportedly put the idea of a Justice League movie on hold in recent weeks after reports came out that the studio was so unhappy with Will Beall’s script that they were considering scrapping it and going in a completely different direction.  But, the early buzz surrounding Man of Steel is that it is an action-packed ride that finally gives Superman his day on the screen.  And, with the film seemingly destined for box office success, the thinking at Warner Bros. has once again shifted towards a Justice League film and how to approach it.

Now, I understand Warner Bros.’ desire to bring Nolan’s Batman back to team with Cavill.  Financially, it makes sense: Warner Bros. had become a laughingstock as of late with talk of their desire to create a Justice League movie for 2015, even though they had no script, no cast, and no director attached.  It was clear that they were trying to find a way to counter the success Marvel had gained with The Avengers, but their approach seemed way off.  Instead of creating individual films that developed each characterthe way Marvel did, Warner Bros. decided to first create a superhero film that introduced everyone with the idea that they’d spin each character off into their own franchise.

Furthermore, if you bring back Nolan’s Batman and team him with Cavill’s Superman, you need no introduction.  It would seem to be the perfect idea on how to approach Justice League—make a movie with Batman and Superman first before bringing everyone else onboard.  But, the more I’ve thought about it, the more I’ve come to realize that this is a terrible idea because it would destroy what Nolan created with Batman.

Even if Man of Steel turns out to be everything we’d hoped for it would still be hard to incorporate Nolan’s Batman into this world.  While Man of Steel will do its best to ground the character in reality, the fact of the matter remains that if you have a movie with Superman in it reality, as we know it, goes out the window.

What made Nolan’s Batman trilogy so iconic was the fact that we were able to relate to Bruce Wayne and his world.  Here was a guy who suffered a tragedy, had 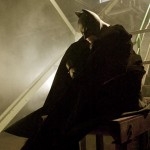 no real superpowers, and used modern technology (and a nice bankroll) to become a crime-fighting vigilante.  Nolan’s Gotham was a representation of any city in the world, and the fact that we were able to connect with Bruce Wayne as a person and to Gotham as a city was what made those films successful.

Reality was the basis for his world: there were no aliens, no Green Lanterns, and namely, no guys in blue spandex and red capes.  Having the Batwing in The Dark Knight Rises rubbed some people the wrong way initially, because they felt that it broke the mold of Nolan’s world.  Having a flying vehicle seemed to tread a fine line between reality and fantasy when it came to the world Nolan had created.  If you bring his Batman back and team him up with Cavill’s Superman, every time we watch his Batman trilogy that sense of reality and normalcy will be tainted because we know that somewhere out there, there’s a Kryptonian alien flying through the skies.

Let’s face it: The Dark Knight Rises left a lot of questions unanswered, namely how did Batman escape that atomic blast at the end?  If they team Bale and Cavill up, I pray they don’t attempt to answer this by saying Superman saved him, which would be a major cop out.

And, how do you bring Batman, and more importantly Bruce Wayne, back to Gotham?  Batman is supposedly dead and has a new successor in John Blake (Joseph Gordon-Levitt) and Wayne Manor is now home to orphans.  Are they simply going to have Bruce Wayne come back and tell both Blake and the orphans to hit the pavement?  Unlikely.

Another issue that would arise if this new Batman/Superman team coexisted in the same world is one that a lot of fans would be asking of Superman: where the hell were you when Gotham was being held hostage by a terrorist and atomic bomb for months?  Granted, the bomb was concealed in a truck lined with lead and Superman can’t see through lead, but with his powers you have to think he would have been able to do something.  Plus, with Gotham being held hostage and every news outlet in the world covering it, wouldn’t the Daily Planet have sent a certain Clark Kent to cover it?

I feel that a Batman-Superman movie would have to spend at least the first half explaining all this.

DESTINED TO DO THIS FOREVER 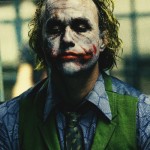 While he wasn’t in The Dark Knight Rises, or even mentioned for that matter, I have to point out the fact that if Bale returned as Batman for a Justice League trilogy, there would have to be some reference or appearance by the Joker at some point.  I know that eight years passed between The Dark Knight and The Dark Knight Rises and in that time we were supposed to assume that any trial and sentence handed down to the Joker had already come to pass.  But, as Heath Ledger’s, Joker ominously told Batman at the end of The Dark Knight, while he was hanging upside down: “I have a feeling you and I are destined to do this forever.”

When I heard Ledger say those lines I got chills for a few reasons: one was because it reminded me of the sad fact that he had passed away, but also because I knew that Nolan was acknowledging the eternal connection between Batman and his greatest foe.  We’ve learned from the comics that no jail can hold the Joker for long, and if a Justice League team formed to battle alien threats, you don’t think the Joker would want in on it?  I realize it is a touchy subject since Ledger’s performance as the Joker was one for the ages, but he would have to make an appearance in some capacity.  I’m not saying the Joker needs to be a central villain by any means, but if you make a Batman trilogy sans the Joker, is it really a Batman trilogy?

The decision to team Bale’s Batman and Cavill’s Superman, should it come to pass, changes the landscape of comic book films entirely.  It immediately makes Warner Bros. and DC relevant again and steals the spotlight away from Marvel.  People would love to see this Batman/Superman combo on the big screen, and Forbes has even said that early projections for this type of film could be around $2B in worldwide box office sales.  But again, bringing back Nolan’s Batman comes with risks and jeopardizes everything Nolan and Warner Bros. did to resurrect Batman after the disaster that was Batman & Robin.  Maybe it’s best to leave Nolan’s world alone and move on in a new direction.  While I trust Nolan implicitly when it comes to anything Batman, this type of Justice League movie would certainly put that trust to the test.