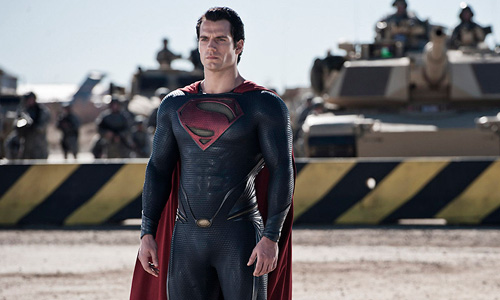 The new issue of SFX, out next Wednesday, features eight pages of Man of Steel “super coverage” but fortunately, we don’t have to wait until then.

SFX has posted excerpts from their interview with director Zack Snyder where he talks about Henry Cavill as Superman, the approach he took to making Superman fly, and what he wanted his Krypton to look like.  Check out the excerpts below, and be sure to buy the issue on May 1.

On Cavill as Superman:

“God, he’s so Supermanish it’s crazy! There was a telling moment – we put him in the Christopher Reeve costume, because we didn’t have a suit yet, we just had the old spandex suit. He stepped out of the trailer and no one laughed. It’s the difference between being Superman and dressing up like Superman. If I’m dressed up like Superman it’s like a Halloween costume. If you’re Henry it’s your clothes. It’s awesome. Watch the movie and you’re like ‘Holy shit, that’s Superman.’ And it’s not weird or crazy, it’s just cool.”

“It’s a more violent experience. It’s raw. It takes effort to do it, and that’s what we were really going for. It’s almost like there’s this kind of Right Stuff quality to it. He’s constantly booming around, accelerating. You think he’s going as fast as he can and then it’s like ‘Yeeaahh!’ He’s always got an extra gear he can use.”

“I really wanted my Krypton to be this kind of special place that’s immersive and totally different from Earth, but not unbelievable. And ancient. I really wanted to give this ancient feeling to Krypton. I love technology that’s rusty because it’s so old. It’s so advanced, but it’s so old. That was the kind of world that I tried to create. A dying world that’s ancient and torn apart.”